Rashid Khan produced a wonderful spell of 2 for 13 but his efforts were outshined by a couple of phenomenon knocks from Dan Christian and Afghanistan teammate Mohammad Nabi pulled off a sensational five-wicket win for Melbourne Renegades against Adelaide Strikers in Match 6 of the 2018-19 Big Bash League on Sunday.

Nabi and Christian joined hands when the Renegades, chasing 175 to win, were reduced to 82 for 5. From there, Christian and Nabi added unbeaten 94 runs off just 48 deliveries to help Renegades leapfrog to pole position. With 33 needed off the final 18 deliveries, Christian took over and as the equation tightened, the allrounder knocked off 20 in the 19th over bowled by Billy Stanlake, including two towering sixes.

Rashid had pulled things back for Strikers after Sam Harper and Cameron White had added 51 runs. From 71 for 1, Renegades lost the next four wickets for just 11 runs with Rashid s magic doing the trick for Strikers. It was Nabi who took the legspinner for his first six, off the penultimate ball of his spell. From there on, it was carnage by Nabi and Christian.

Ben Laughlin, who bowled the 13th over, was taken for 15 runs, and the duo only carried on from there. Eventually, the match finished with five balls to spare with Nabi and Christian remaining unbeaten on 48 off 30 and 49 off 27 respectively.

Earlier, the Strikers were off to a pretty average start when opener Alex Carey was dismissed cheaply. Colin Ingram and Jake Weatherald got the total to 46 but the innings were far from fluid. A 104-run stand between Matthew Short and Jonathan Wells brought them a competitive total before Kane Richardson dismissed both. Short s 41-ball 65 was his best, his half-century coming off 32 deliveries. 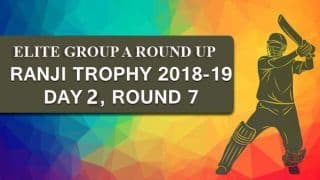