Chasing 169 to win, Strikers were skittled for 97 despite a valiant effort by Colin Ingram.

Shane Watson led from the front as Sydney Thunder beat defending champions Adelaide Strikers by 71 runs in the Big Bash League. Watson plundered five sixes and four boundaries to score 68 off 40, a crucial hand that got Thunder 168 on a difficult batting surface. Chasing the target, Strikers were skittled for 97 despite a valiant effort by Colin Ingram.

Watson and Anton Devcich started positively before Rashid Khan struck twice in two balls to remove the New Zealander and then Callum Ferguson for a first-ball duck. 34 came off the first three overs with Devcich taking on Michael Neser and a returning Billy Stanlake.

Jason Sangha and Watson combined to add 77 runs for the third wicket to put the innings back on track with the Thunder skipper launching a relentless attack. Liam O’ Connor was taken for multiple boundaries off his first over. Dropped on 35, Watson brought up his 50 off 27 balls with a six. But he couldn’t quite carry on and perished for 68.

Sangha entertained with four boundaries before he was snared by Stanlake. The Australia pacer struck again three balls later removing Daniel Sams for the second duck of the innings. But there was enough firepower in the Thunder batting line-up and it came to the fore with Jay Lenton. His unbeaten 27 off 16 with two sixes and Chris Green’s 11 off 6 gave Thunder a total they’d be reasonably happy with.

The way Strikers responded though was abysmal. They kept losing wickets in a heap, the first of which came in the first over. Devcich removed Jake Weatherald for 4 followed by the dismissal of his opening partner Matt Short out LBW to Gurinder Sandhu. Only three players got into double figures Ingram, Travis Head’s 10 and Jonathan Wells (11).

It was Arjun Nair, whose timely strikes did the most damage. Nair finished with 3 for 12 and removed the in-form Ingram who had fought valiantly to score 48 off 30 with four fours and two sixes. He later returned to get rid of Neser and Ben Laughlin for ducks. The rest of the bowlers picked up a wicket each. 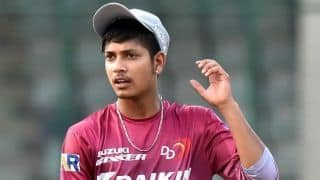 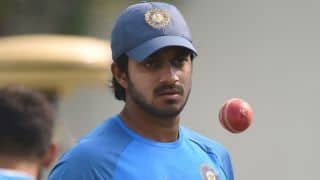