Former New Zealand skipper Brendon McCullum proved an irritant for some of his one-time Blackcaps team-mates as he played a pivotal role in Team Rugby defeating Team Cricket in the inaugural Black Clash T20 at Christchurch’s Hagley Oval on Friday.

In front of a crowd of over 7,000 at the boutique venue, Brendon McCullum made 48 from 32 balls and All Blacks star Jodie Barrett a handy unbeaten 42 from 26 balls as Team Rugby chased a target of 169 with five wickets and five deliveries remaining. This made them the winners of the Lomu-Crowe Trophy, in honour of the late New Zealand sporting icons Jonah Lomu and Martin Crowe.

Chasing 169, Team Rugby lost Read for 2 when he clipped James Franklin to Kyle Mills at square leg. In Franklin’s second over, former Australia batsman David Hussey was bowled. That ushered in Brendon McCullum, who survived the hat-trick ball.

Beauden Barrett made 26 before he was bowled by Nathan McCullum, after which Brendon McCullum and Kaylum Boshier, who last year led New Zealand Under-19s at the junior World Cup, guided the chase with the multi-sport Boshier making 30. Needing 37 from he final four overs, Team Rugby lost McCullum when he found his former team-mate Grant Elliott at deep square leg, but Barrett hit consecutive sixes off All Blacks team-mate Aaron Smith, and got them over the line with five balls left in the game.

Earlier, Team Cricket opened with Stephen Fleming and Nathan Astle in throwback to the 1990s. Off the first ball of the match, All Blacks icon Richie McGaw dropped Astle at gully but atoned for his drop when he plucked a good catch in the covers to get Fleming (6) off Barrett. Fleming also survived an lbw shout off Israel Dagg.

Astle made 14 before he fell to McCaw’s left-arm slow-medium pace, having been dropped by Barrett off Boshier. Elliott showed his experience by scoring 43 to get Team Cricket to 168/8 with Chris Harris making an unbeaten 28 in a harkback to his days as a Blackcaps finisher. 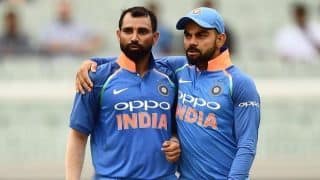 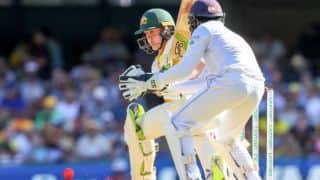