Kieron Pollard‘s Trinbago Knight Riders smashed a plethora of T20 records to score he highest T20 total in franchise cricket. TKR’s 267/2, powered by half-centuries from Lendl Simmons and Colin Munro‘s belligerent assault, was the third-highest total in any T20 game which was enough to down Jamaica Tallawahs in Match 10 of the Caribbean Premier League 2019.

The Tallawahs responded with a strong 226 of their own but it couldn’t prevent TKR from winning the match by 41 runs and stretch their unbeaten run to four games.

It was a forgettable night for the bowlers across both camps. TKR, batting first were off to a flyer with Sunil Narine and Simmons plundering 55 inside six overs. Narine blitzed away to scoring three boundaries and a six before Zahir Khan bowled him for an 18-ball 20. From there, Simmons and Munro took over and there was no looking back. The pair hammered 124 runs for the second wicket inside 10 overs to knock the wind out of Tallawahs’ sails.

Simmons and Munro plundered the attack like a couple of professional players dishing out a beatdown on a school team. Oshane Thomas was the bore the most brunt of their assault going for 63 in four overs, with Simmons plundering him for a six and three fours in an over. TKR had already posted 63 inside the Powerplay and once Simmons reached his half-century, Munro went into overdrive hammering six boundaries and eight towering sixes.

Simmons belted fives sixes of his own but was dismissed is the ball he was out caught to a free hit in identical fashion. If the Tallawahs had any hopes of containing TKR after Simmons’ wicket, those hopes were thwarted by skipper Pollard, who smoked 45 off 17 balls with four boundaries and three sixes.

The Tallawahs showed no signs of throwing in the towel when Chris Gayle and Glenn Phillips smashed 88 inside the first eight overs. Phillips scored 20 off the second over and Gayle took on Narine to hit him for two fours and two sixes each. But after a strong Powerplay which saw the Tallawahs score 67, Mohammad Hasnain removed the dangerous Gayle and Chadwick Walton for 6.

Without Andre Russell it was always going to be improbable for the Tallawahs to gun this total down and once Rovman Powell had to retire hurt for 6, their chances got really slim. Phillips continued the fireworks but once he and George Walker fell off successive deliveries, Tallawahs’ chase was derailed. Javelle Glen and Ramaal Lewis struck some lusty blows towards the end but all it did was reduce the margin of defeat. 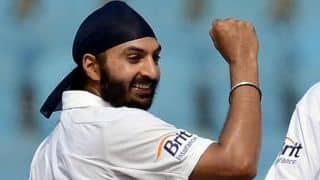