The Guyana Amazon Warriors juggernaut continued in the CPL 2019 as they notched up a 10th consecutive win of the tournament.

The Guyana Amazon Warriors juggernaut continued in the CPL 2019 as they notched up a 10th consecutive win of the tournament with a seven-wicket drubbing of Trinbago Knight Riders in the final league match of the season.

Chasing 144 to win, the Warriors were 59 for 3 before skipper Shoaib Malik and Nicholas Pooran came together for an unbeaten 85-run partnership which got them over the line with the wicketkeeper batsman scoring a half-century. Brandon King and Chanderpaul Hemraj added 35 for the opening wicket, after which James Neesham, Kharry Pierre and Ali Khan struck in quick succession.

Malik and Pooran took the total to 102 before Pooran decided to give a stick to Neesham, smacking the allrounder for 19 runs in the 17th over, including two boundaries and a six. He reached his fifty with a boundary and followed it with another one off the next ball to propel Warriors to the top of the table. Malik was 28 not out of 29 with two boundaries, while his partner sizzled with five fours and three sixes.

Hemraj, with the ball, had reduced the Knight Riders to 41/3, with Denesh Ramdin enduring a golden duck and Lendl Simmons scoring 30 off 24 with three fours and two sixes. However, the innings fell on track with Colin Munro and Kieron Pollard adding vital 38 runs for the fifth wicket. Pollard faced eight balls, two of which he scored boundaries off, while Munro scored at just over 100 his 43 coming off 40 balls which included a couple of boundaries and sixes each.

The Warriors finish the league stage with 20 points, followed by Barbados Tridents, St Kitts and Nevis Patriots and the Knight Riders at 2, 3 and 4. Qualifier 1 and the eliminator will be contested between the four sides on Sunday. 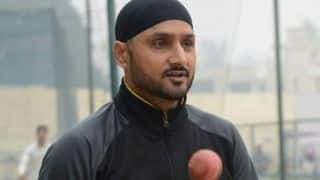