Middle-order batsman Hanuma Vihari and left-arm spinner Shahbaz Nadeem played pivotal roles in India B s 43-run win over India A in the opening fixture of the Deodhar Trophy 2018-19 at the Feroz Shah Kotla, New Delhi on Tuesday.

Middle-order batsman Hanuma Vihari and left-arm spinner Shahbaz Nadeem played pivotal roles in India B s 43-run win over India A in the opening fixture of the Deodhar Trophy 2018-19 at the Feroz Shah Kotla, New Delhi on Tuesday.

Opting to bat first, India B lost opener Rituraj Gaikwad to Mohammed Siraj for just two before in-form Agarwal and skipper Iyer added 59 runs for the second wicket. Krunal Pandya removed Agarwal in the 15th over, followed by the wicket of Iyer by Ravichandran Ashwin two overs later.

However, India B got back on track courtesy a 99-run stand for the fourth wicket between Tiwary and Vihari. But Tiwary s wicket, with the score on 194, courtesy a run-out by Siraj, opened the floodgates and India A managed to restrict the run flow picking up four wickets for 51 runs.

In reply, Nadeem dented India A with the wickets of Prithvi Shaw (16) and Karun Nair off consecutive deliveries in the third over. Deepak Chahar then proceeded to remove Anmolpreet Singh for 16 to reduce India A to 36/3.

Ankit Bawne s departure for 3 – cleaned up by Varun Aaron – had India A in all sort of trouble. Skipper Dinesh Karthik though put up a strong resistance and found company in Pandya (17), but only for a brief while as India A lost half their side for just 87 runs.

Tamil Nadu teammates Ashwin and Karthik then brought some kind of semblance to the run chase with a stand of 123 runs for the sixth wicket.

However, Markande broke the stand in the 43rd over with the wicket of Ashwin for 54 and Nadeem came back to provide the crucial breakhough – that of Karthik for 99 – in the next over.

Markande then ran through the tail claiming the last three wickets as India A lost their last five wickets for just eight runs. 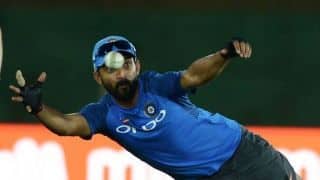 I sometimes feel Virat Kohli is not human: Tamim Iqbal