MANCHESTER: Three years after Carlos Brathwaite did the near-unthinkable against England in the final of the ICC World T20 at the Eden Gardens, the allrounder nearly pulled it off again at the Old Trafford. ALSO READ: Great learning curve, says Williamson

Chasing 292 to win a score that was able due to Kane Williamson s second successive century in the World Cup and stay alive in the tournament, West Indies had slipped to 164 for 7, reeling and on course to crashing out of the tournament. Brathwaite, however, rose to the occasion, slamming his maiden ODI century to raise hopes of a miraculous win. ALSO READ: Williamson’s career-best lifts New Zealand to 291

He single-handedly brought the equation down to six required off the last seven balls but failed to clear the boundary this one last time. As Trent Boult held his nerves to take the catch at long-on, James Neesham, with that crucial wicket, ensured New Zealand stayed unbeaten, while the West Indies campaign, despite that heroic effort, sadly, has all but ended with a fourth loss. Although the significance of this one isn t as big as that fateful night in Kolkata, Brathwaite embodied West Indies fighting spirit.

Along the way, Brathwaite forged three crucial partnerships 47 with Kemar Roach, 34 with Sheldon Cottrell and 41 with last man Oshane Thomas. That s 122 for the final three wickets. When it was down to the last one, West Indies still needed 47 off the last five, which became 33 off 18. With three overs remaining, Brathwaite took flight. Matt Henry was taken for 25 runs three sixes and a four before Neesham picked up the all-important wicket.

With Evin Lewis going off the field due to a hamstring strain, West Indies were back to Chris Gayle and Shai Hope at the top. But the partnership lasted just three runs when Hope played on to Boult. Nicholas Pooran played an ambitions hook which took the top edge for Tom Latham to complete the catch. West Indies were kept awfully quiet at 26/2 in seven overs.

After teeing off, Gayle launched Henry for two sixes and a four, and never looked back. With Shimron Hetmyer, Gayle tucked into the New Zealand pacers. From five off 23, he raced to 50 off 51 deliveries, putting away a short and wide ball from Neesham. Suddenly, there was life in this West Indies chase.

Hetmyer decided to take on the short delivery. 28 of his runs came through pulls or hooks, as he swatted anything short in sight. Gayle and Hetmyer struck boundaries with disdain to keep the required rate under control.

Mitchell Santner wasn t the luckiest. In his first over, he had Gayle dropped twice in a space of four balls. Henry dropped a sitter running in from deep square leg and Colin Munro just about managed to get a hand to a Gayle swing towards deep midwicket. Hetmyer then swept Santner but the ball landed between three fielders converging in. To add salt to wound, Gayle plundered him for three sixes.

With Hetmyer and Gayle batting together, West Indies had a chance. But once Lockie Ferguson cleaned up Hetmyer with a slower ball that kept a bit low, West Indies chase skidded off road. Jason Holder endured a first-ball duck before the priced-wicket of Gayle was scalped by Colin de Grandhomme. Boult returned to remove Nurse and a hobbling Evin Lewis in four deliveries. Nine out of ten times, this was predicted to be another one of West Indies classic implosions before the crowd witnessed a classic from Brathwaite. With a pull towards deep midwicket, Brathwaite celebrated his century, but perished going for the glory hit.

Earlier, Williamson ensured his legacy grew with a career-best score. Three days after his magnificent century shepherded New Zealand s successful chase of 241 against South Africa, the skipper made it two out of two. Williamson walked out when the score read 0/1, when Cottrell had removed Martin Guptill for a first-ball duck, and in the same over, dealt another first-ball duck to Munro. At 7 for 2, Williamson and Ross Taylor led a spirited New Zealand fight back putting on 160 runs for the third wicket.

West Indies had a dream start. The movement on offer was enough for the ball to strike Guptill on his back pad first ball of the match. Initially declared not out, West Indies reviewed and the decision was overturned. Off came the salute, and West Indies tormentor from the previous World Cup was back first ball. The second first-ball duck belonged to Munro. With the two out-of-form batsmen back early, New Zealand were steadied by the two most in-form batsmen. Williamson and Taylor batted without much fuss, blunting the new ball, seeing off the swing before bringing out the shots.

From 30 for 2 after the first Powerplay the lowest score after 10 overs in the World Cup through some exquisite strokeplay, the 50-partnership was raised. In a matter of two balls, Williamson and Taylor brought up their respective half-centuries before West Indies struck out of the blue, through Gayle. Taylor gave himself room but found Holder at mid-on. But Williamson carried on to dish another fine knock. He sweetly timed a cover drive to enter the 90s and brought up his 13th ODI century putting away a poor ball from Roach. With Latham, Williamson added 43 off 38 before the left-hander returned a catch to Cottrell.

New Zealand had set themselves nicely for a late push, which was assured by Williamson and Neesham. They scored 33 off three overs, but in between that, Hope grassed a chance of Williamson. It didn t hurt West Indies much as Cottrell returned to eventually remove Williamson to a top edge. Cottrell, who finished with 4/56, had de Grandhomme run out and took a couple of catches to remove Santner and Neesham. 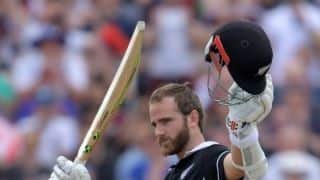