Mithali Raj scored a half-century as India defeated Pakistan by seven wickets to register their second win in as many matches of the 2018 ICC Women's World T20.

Mithali Raj scored a half-century as India defeated Pakistan by seven wickets to register their second win in as many matches of the 2018 ICC Women’s World T20 in Guyana on Sunday. Chasing 134, Veda Krishnamurthy finished off the game in style with a boundary as India made 137/3 in 19 overs.

Mithali opened the innings and was out after scoring 56 off 47, hitting seven fours. India began their innings with 10 penalty runs added to their total after Pakistan batters were thrice warned for running into the danger zone. Together with Smriti Mandhana, Mithali gave India a bright start as the pair added 73 runs before being separated. Mandhana struck four fours before being caught for 26 off 28.

Jemimah Rodrigues made 16 before hitting one straight into the hands of bowler Nida Dar for a return catch. Mithali fell in the 18th over but by then India needed just 11 runs more to win. Captain Harmanpreet Kaur (14*) and Veda (8*) completed the formality as India secured a comfortable win.

Half-centuries from Bismah Maroof and Nida Dar guided Pakistan to a decent 133/7 after they were jolted by early blows. Their innings began and ended on a similar note – in a flurry of wickets. A couple of run-outs left them in a state of trouble early on after India opted to field first at the Providence Stadium. Indian fielders were generous, dropping as many as three catches to allow Pakistan recover from 30/3 to 124/3.

Nida was dropped twice – once on 15 and then on 29 – and she capitalised to score 52 off 35 with the help of five fours and two sixes. Mahroof scored 53 off 49 while hitting four boundaries.

However, India came back strongly in the death overs to restrict them after the settled batters departed in quick succession. The pair added 94 runs for the fourth wicket to dig their team out of a hole. They had lost opener Ayesha Zafar for a six-ball duck in the very first over. Then two run-outs – Omaima Sohail (3) and Javeria Khan (17) – left them wobbling. It was then that Bismah and Dar got together and steadily began rebuilding the innings.

The partnership was broken by Dayalan Hemalatha with the wicket of Mahroof in the 19th over. Dar struck a six to reach her fifty but was caught off the very next delivery.

Poonam Yadav picked up two wickets in the final over, both via stumpings, and allowed just five runs in it as India pulled things back. Pakistan would rue those 10 penalty runs as it could have made things interesting. 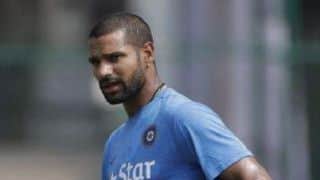 It doesn’t matter what people say, I back my batting: Shikhar Dhawan