India B outplayed Afghanistan in the second match of the Under-19 Quadrangular series by seven wickets.

India B outplayed Afghanistan in the second match of the Under-19 Quadrangular tournament by seven wickets. Fast bowler Purnank Tyagi and P Ray Burman shared seven wickets to bowl Afghanistan Under-19 out for a lowly 106. Tyagi, with figures of 4/36 razed through the top order while Burman went through the middle-order batsmen to finish with miserly 3/10 from 10 overs.

India B lost opener Nitish Kumar Reddy first ball of their chase and were reduced to a concerning 5/3. Abdul Rahman removed P Ranjan Paul and PS Kanpillewar for nought before Tilak Verma and captain RS Chandrol saw India B through with an unbeaten partnership of 106. Verma remained unbeaten on 44off 70 with four boundaries and Chandrol was not out on 56 off 51 with five boundaries and a six. Together, they took India over the line inside 23 overs.

Barring Fazal Haq 1 for 9 from five overs and Rahman, the rest of the Afghanistan bowlers came under threat with Verma and Chandrol. Jamshid Khan gave away 20 in his three, and Shafiqullah Ghavami and Ihsanullah Mandozai combined to conceded 37 off seven overs.

But while Verma and Chandrol shepherded the chase, due credit goes to the bowlers for the way they operated. The pace bowling combination of Tyagi and Sushant Mishra removed Afghanistan’s top order to 6 for 51 and it was primarily due to the efforts of wicketkeeper Ishaq Zazai and Jamshid Khan. Jamshid and Zazai played out 72 and 81 deliveries to score 20 and 28 each to forge a 33-run partnership, aided by Rahman’s 10 off 11 which ensured Afghanistan crossed the 100-run margin.

First Published on
Last updated on March 5, 2019 4:25 PM IST
TOPICS:
India B Under 19 Under 10 Quadrangular Tournament 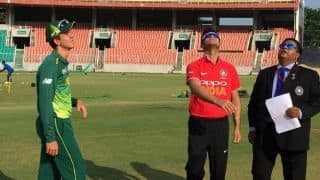