It rained. It rained some more. In between the showers, after a delayed start to day three at Adelaide Oval, Jasprit Bumrah got a wicket. After the second interruption, Mohammed Shami took two in two balls to hand India a lead of 15 runs and leave himself on a hat-trick when Australia bat in the fourth innings. Rishabh Pant  held the catches of all three Australian wickets to fall, giving him six for the innings to equal the Indian record held by MS Dhoni.

KL Rahul and Murali Vijay achieved their first 50-plus opening stand outside of India to drive India’s lead forward, before both fell to silly drives outside off stump. Rahul proved that he could see out the new ball, then hit a stunning six over extra cover only to fall for 44 just minutes before tea. Having faced 63 balls, the second most he’s faced this year after the 224 he needed to get that dead-rubber 149 in England.

Cheteshwar Pujara successfully reviewed two decisions against Nathan Lyon. Virat Kohli , for a change, got to sit with his pads on for 24.2 overs, and while batting became the fastest batsman to 1000 runs on Australian soil. He got to within 15 minutes of stumps, shunning his natural instincts to play 104 balls for 34 before he fell to the always-threatening Lyon, who with six dismissals is now the most successful bowler against Kohli.

The result of this stop-start but wholly engaging day was that at stumps on Saturday, India had a lead of 166 over Australia. At 151/3, with two days left and Pujara batting on 40, they can seriously shove Australia out of this Test. It was good, hard Test cricket.

India dominated each passage. Play started 45 minutes late owing to rain and India got in 3.4 overs before the rain returned. In that brief period Mitchell Starc moved from 8 to 15 before he became Bumrah’s third wicket, and immediately the on-field umpires signalled for the teams to leave as the rain increased. Australia were 204/8 with Travis Head batting on 66.

When the rain relented, Lyon injected a busy 24 in a stand of 27 with Head, hitting two fours and a six. That six came off Shami’s first ball of the morning, a confident swat over deep square leg. Shami had the final say, however, forcing edges off Head (72) and Josh Hazlewood.

With a slender lead, Rahul and Vijay negotiated a tricky passage on a pitch on which plenty of water had fallen. A tasty contest ensued, which the openers won while adopting a watchful approach – something they had failed to accomplish on day one – before flourishing. Briefly, it must be said.

Six runs came in four overs. After eight, both openers had faced 21 deliveries. Rahul had one run, Vijay three. Hazlewood started with four consecutive maiden overs, Starc conceded four runs in his four. Starc and Hazlewood tempted both with repeated balls angled across, some very inviting, but the openers resisted the urge to smash them into the offside. Rahul appeared intent to leave most away-moving deliveries, a conscious decision no doubt after a year littered with faulty drives and wafts. Vijay shouldered arms confidently and defended with a straight bat.

The sight of Pat Cummins produced the first aggressive shot of the innings, an airy drive from Rahul into the covers for three. The first boundary off the bat came in the tenth over when Rahul again went aerial but timed it better over extra cover. The confidence grew with that shot, as evidenced by a booming drive that connected with air and then a flash over the slips for four more.

From nine off 29 balls, Rahul zoomed to 20 in the next eight. Them came a stunning six over extra-cover off Cummins, as Rahul planted his foot forward and backed himself to complete the shot. Next, a picture-perfect cover drive for four to put 50 on the board.

Starc ended the stand at 63 when he returned and had Vijay poking and edging to second slip. Paine then summoned Hazlewood, who duly got Rahul in second over. Both fell to loose shots after putting in the hard yards – how long these two will last in the squad remains a major question – but handing Kohli the cushion of a lead of nearly 100 can be viewed as progress.

Pujara successfully reviewed a caught-behind decision off Lyon on 8 and then on 17 when Nigel Llong gave him lbw. Batting as he did on day one, with Kohli equally assured, he blunted the constant threat of Lyon’s overspin and bite and took India past 150. Tap, tap, lunge, shimmy, cut, flick.

After falling for 3 in the first innings, Kohli took a leaf out of Pujara’s book and played himself in. No frills, no haste. His strike-rate was 32.69 when Lyon had him caught at short leg – the reward of some excellent bowling all session – which was Kohli’s second slowest innings of at least 100 balls faced. That approach suited India wonderfully, and now Pujara has a great chance to bury Australia on Sunday. 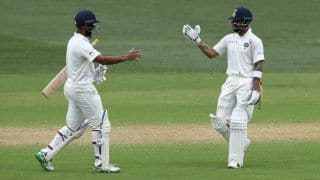