India lost KL Rahul and Cheteshwar Pujara in pursuit of a massive target of 287 in Perth.

After a wicketless morning session in which Usman Khawaja and Tim Paine  added 58 runs in 30 overs, India stormed back with four wickets in quick time during the first hour after lunch with Mohammed Shami bowling excellently on an up-and-down pitch to claim career-best figures of 6/56.

This set them a very tough target of 287, which was made to look like 400 when Australia‘s new-ball pair removed KL Rahul for 0 and Cheteshwar Pujara for 4 to slump to 15/2 by tea. Rahul was bowled by Mitchell Starc when trying to leave and Pujara was undone by a snorter from Josh Hazlewood.

This could even be out of the grasp of the seemingly superhuman batsman that is Virat Kohli.

India grabbed five wickets for 15 runs after lunch, four of them to Shami, but in reaching 287 Australia set India a huge target on a surface increasingly showing its ugly side. The last-wicket pair of Starc and Hazlewood injected 36 runs after Australia has fallen to 207/9 and then returned to their main occupation to rattle India.

In the morning session, Khawaja moved from 41 to 67 and Paine was 37 from 111 balls at the lunch break. It wasn’t for the T20-weaned viewers. Paine and Khawaja had some plays-and-misses, both when pushing and wafting, as the odd ball hit a crack and either stayed low or sprang up. Even Hanuma Vihari’s off spin had Paine feeling and missing, which will keep Nathan Lyon very interested.

Khawaja got his fifty off 155 balls, a dour innings which has batted him back to a level of confidence. The left-hander got several deliveries that kept low, but his approach allowed the score to move on at a sedate pace which suited Australia just fine.

As the wicketless overs ticked on, Kohli appeared more and more frustrated and was seen having a yap with Paine, whom he had been heard over the stump mics on Sunday giving a go to the Australian skipper.

The was day snapped out of its somber mood immediately after lunch with two wickets in two balls to Shami, who ended Paine’s resistance on 37 with a sharp bouncer which the Australian captain glanced to Rishabh Pant, and next ball strangled Aaron Finch down the leg side, the resultant gloved shot being pouched by Pant. Should Australia have sent Finch out immediately after lunch, given he had only been cleared to bat a couple of hours earlier? It is debatable.

The new ball as grabbed without hesitation but Pat Cummins deflected the hat-trick ball wide of gully for a single. Next to go was Khawaja for 72 off 213 deliveries, surprised by a ball that hit a crack and leapt up to take the glove through to Pant. It needed a brute of delivery to end such an obdurate innings, one that laid the template for how to bat on this tricky Perth surface.

Without a run added, Australia next lost Cummins who was beaten by a ball from Jasprit Bumrah that crept under his bat. When Nathan Lyon backed away and sliced out to deep point running in, it gave Shami career-best figures and the most wicket for an Indian bowler in away Tests during a calendar year, surpassing the 41 that Anil Kumble claimed in 2006.

That nasty spell of 9-2-22-4 from Shami was what India desperately needed after a wicketless morning session. Bumrah was equally testing in a burst of 5-3-2-1.

Starc and Hazlewood used their angled bats to produce useful runs, each hitting boundaries to add on the pressure. Bumrah ended the innings when he bowled Starc for 14. 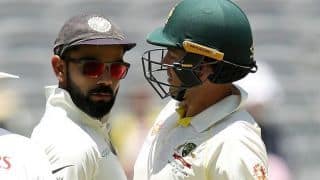