By lunch on Thursday, India had lost four wickets - all to pace, all edges behind the stumps - at Adelaide Oval.

A familiar tale unfolded on the opening morning of the first Test between India and Australia at Adelaide Oval. Well, maybe not that familiar because Virat Kohli managed to win a toss – his second in nine overseas Tests this year – but the scenes did have a certain deja vu.

India lost two wickets in seven overs, their openers departing to nagging and accurate pace bowling, Kohli found himself in early yet again and the touring team were under pressure early. This was exacerbated when Kohli fell cheaply for three to Pat Cummins, the third Indian wicket to fall with 19 runs on the board.

By lunch on Thursday, India had lost four wickets – all to pace, all edges behind the stumps – and Cheteshwar Pujara (11*) and Rohit Sharma (15*) had their hands full.

Kohli called correctly at the toss and won his second toss in nine overseas Tests this year, opting to bat on a pitch full of runs, but it was Australia who were the early celebrants of an early wicket. KL Rahul, after clipping two off the pads in the opening over, steered the last ball of Josh Hazlewood’s first over to third slip with an expansive drive.

That dismissal for two lowered Rahul’s batting average in Tests this year to 23.44. Subtract the 149 he scored in the last innings of the England tour and that falls to 16.05. Once again, as so often with Rahul, the wicket was not the bowler producing something exceptional. The ball was full, wide and fast and Rahul couldn’t curb his enthusiasm.

Murali Vijay, playing his first in nearly four months, and averaging 21.18 this year, made 11 before he too departed to an ill-advised waft away from the body and edged Mitchell Starc  to Tim Paine. A nothing shot, as the cliche goes, from a batsman who would not have played this Test had Prithvi Shaw not injured himself during the tour game.

ALSO READ: For the second time in 2018, Kohli wins an away toss

The first bowling change produce the biggest wicket, courtesy a spectacular one-handed catch by Usman Khawaja at gully. Kohli saw width from Cummins, chased it it and edged in the air for Khawaja to leap to his left and pluck a stunner. India 19/3 in 10.3 overs, their talismanic captain gone for three.

Nathan Lyon was welcomed by Ajinkya Rahane sashaying out to hit him for six over long-on, and so Paine went back to Hazlewood. Second ball, Rahane flashed a booming drive and edged to second slip for 13. India were 41/4, the result of uncertain strokeplay against tidy, honest bowling.

Pujara’s first boundary and India’s second – came early in the piece but that was his only flowing shot as he buckled down to be 11 not out off 62 balls at the lunch break. Rohit hit a four and six the 23 balls he’s faced so far. 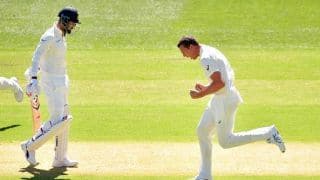