India lost four wickets before lunch – all to pace, all edges behind the stumps – and two in the afternoon to Lyon.

A familiar tale unfolded on the opening day of the first Test between India and Australia at Adelaide Oval. Well, maybe not that familiar because Virat Kohli managed to win a toss – his second in nine overseas Tests this year – but the scenes did have a certain deja vu.

India lost four wickets before lunch – all to pace, all edges behind the stumps – and two in the afternoon to Nathan Lyon to head into tea on 143/6. Cheteshwar Pujara was unmovable at one end, having faced 141 balls for his 46 runs. The next best scores came from Rohit Sharma (37) and Rishabh Pant (25).

Batting first on a hard Adelaide Oval surface gave India a huge advantage but they lost two wickets in seven overs, their openers departing to nagging and accurate pace bowling. KL Rahul, after clipping two off the pads in the opening over, steered the last ball of Josh Hazlewood’s first over to third slip with an expansive drive. Murali Vijay, playing his first in nearly four months, made 11 before he too departed to an ill-advised waft away from the body and edged Mitchell Starc  to Tim Paine. A nothing shot, as the cliche goes, from a batsman who would not have played this Test had Prithvi Shaw not injured himself during the tour game.

Kohli found himself in early yet again as the touring team were put under pressure early, but he fell cheaply for three to Pat Cummins, the third Indian wicket to fall with 19 runs on the board. Kohli saw width from Cummins, chased it it and edged in the air for Usman Khawaja to leap to his left and pluck a one-handed stunner. Cummins has now dismissed Kohli twice in four balls in Test cricket.

Lyon was welcomed by Ajinkya Rahane sashaying out to hit him for six over long-on, and so Paine went back to Hazlewood. Second ball, Rahane flashed a booming drive and edged to second slip for 13. India were 41/4, the result of uncertain strokeplay against tidy, honest bowling.

Rohit’s comeback innings included three sixes, one of them on the rise over mid-off off Starc, but attempting his second six in two balls off Lyon, he fell to a horrible shot. Advancing to Lyon, Rohit was hurried into a chip off the pads and top-edged to deep square leg. A six off the pads from Pant, eighth ball faced, put 100 on the board for India and was the fifth of the innings. It spoke of India’s approach to batting on day one.

Pant followed that six by getting a leading edge wide of the slips for four, when looking to whip Starc away again. Lyon then had Pant when a faint nick was feathered through to Paine when the left-hander pressed forward to a turning delivery.

By this stage, Pujara was 35 off 119 deliveries, having hit three fours. His footwork was overall assured and soft hands saw him see off the testing new-ball attack from Starc and Hazlewood. His first four was one of two that India managed in the first hour, and overall Pujara’s adhesiveness was a welcome sight for India. Occupation of the crease is his thing, and today it has proven face-saving, so far, for India.

With R Ashwin – four Test hundreds to his credit – Pujara saw out the remainder of the second session. 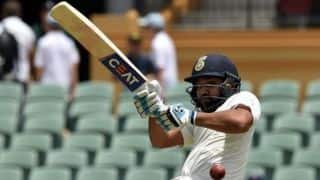