India resumed on 112/5, needing a further 175 runs to beat Australia, and lost five wickets for 28 runs.

It took Australia 15 overs to take the remaining five wickets on day five of the second Test in Perth to crush India by 146 runs, thus levelling the four-match series 1-1.

India resumed on 112/5, needing a further 175 runs to beat Australia, but never came close – as expected given the feeble nature of their very long tail and the up and down Optus Stadium surface – and lost five wickets for 28 runs.

Nathan Lyon opened the bowling on Tuesday and claimed the wicket of Rishabh Pant while Mitchell Starc removed Hanuma Vihari and Umesh Yadav in a crippling burst before Pat Cummins bounced out two wickets in his only over required.

Starc opened the doors for Australia to push through India’s tail, having Vihari (28) flicking a poorly timed shot to midwicket. Pant hit a couple fours to move to 30 before a whip off Lyon was excellently intercepted by a diving Peter Handscomb at midwicket.

The tail exposed, Starc charged in and used the short ball to great effect. Umesh was made to sway and swish, and a well-directed bouncer had him fend back a return catch and the end came when Cummins charged in with a plan and snuffed out Ishant Sharma and Jasprit Bumrah.

Cummins got Ishant with this fourth delivery, the tailender backing away and feathering a catch to Tim Paine, and then Bumrah swatted a top edge back to the bowler who settled under it.

India have been bruised, and their team selection must be questioned. They didn’t opt for a spinner and instead picked Umesh. The fourth pace bowler conceded 139 runs for two wickets and scored six runs. Australia used didn’t need a fifth bowler, with Starc, Cummins, Lyon and Josh Hazlewood more than enough to claim 20 Indian wickets. 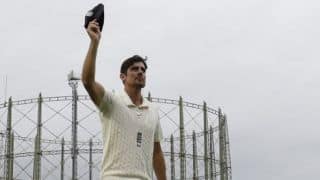 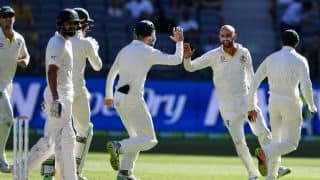