There was pace, there was bounce and there was a bit of swing. But India’s four-pronged pace attack was unable to match the intensity required on a very hot morning at Perth’s Optus Stadium and the result was the first 50-run stand between Australia’s latest opening act.

Australia wanted to bat and did, and at 66 without loss they have a great platform from where they can push for a big total after Marcus Harris eased to 36 and Aaron Finch showed the beginnings of what could be a handy contribution after a horror time in Adelaide.

Given all the speculation and chatter about the nature of the Optus Stadium pitch in its Test debut, there was reason to believe that bowling first was the way to go. But with temperatures on Friday the hottest of all five forecast day of this Test, Tim Paine chose to bat on clear morning on a pitch with a tinge of green on it. Virat Kohli  said at the toss that he wasn’t disappointed to have first crack at Australia’s shaky top order, having dominated the Adelaide Test, but his four-man pace attack didn’t test the batsmen enough.

India’s bowlers lacked rhythm when it mattered – the first 12 overs, from which 45 runs came. They beat the ball frequently, especially in the second hour, but without reward. The closest India came to a wicket during the first session was when Kohli flung the ball from mid-off and Finch sprawled to make his crease.

Searching for swing, the quicks erred in line and allowed Harris and Finch to clip and drive without worry early on. Rishabh Pant had a tough time behind the stumps, forced to repeatedly fling himself around to stop wild balls down the pads. He did well, it has to be said.

Getting ample deliveries on the pads, Harris and Finch flicked and drove and scampered singles. Harris was allowed to drive and punch down the ground, and did so with two firm boundaries off Ishant Sharma in his opening spell of 4-2-14-0. Jasprit Bumrah  used both angles in his opening burst of 5-0-20-0 but was unable to find purchase.

India reviewed an lbw shout against Finch off Mohammed Shami, but in vain. Off the very next ball, Shami thudded the ball into Finch and again the verdict was not out. India did not review, and ball tracking had the ball hitting the top of the stumps. Shami was controlling in his first spell of 4-2-3-0 and the best of the four.

When Umesh Yadav came on, Kohli removed himself from the slip cordon and stood at mid-off so he could be in the bowler’s ear. Nothing worked, and Umesh bowled a wicketless spell. Harris took two fours off him in an over and raised the 50 partnership with his sixth boundary, a terrific square-drive off Umesh that sped away.

Ishant was well down on speeds during his second spell, which was a surprise given his showing in Adelaide. Was it the heat? Was it the fear of no-balls?

Though he was twitchy as the dot balls piled up, Finch showed signs of learning from Ricky Ponting  with a greater press forward and better awareness of which deliveries to leave. Shortly before lunch he edged Bumrah wide of third slip for four. The value of not losing early wickets has been far greater than what the scorecard shows. 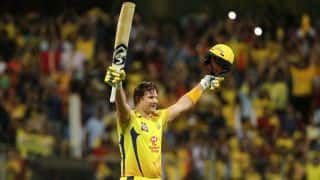