Following an opening stand of 112, Australia were pegged back on a very uneven Optus Stadium surface.

It took a while to unravel, but unravel Australia did as India s four-man pace attack – with a huge contribution from Hanuma Vihari – pulled matters back with three wickets in the second session and three more after tea to reduce the home team to 277/6 on day one in Perth.

Travis Head s counter-attacking 58 took Australia to a level of respectability, but they would have desperately wanted him to convert that promising start into the hundred that never came in Adelaide.

The Optus Stadium surface has started to pose problems. Friday showed the inconsistent and at times alarming bounce – or lack of – of the Perth pitch on a muggy day on which India s quicks went wicketless in the morning but roared back. Edges fell short, balls were squirted past square leg, some sprang up and some were grubbers. The good-length ball that Tim Paine shaped to flick from off stump hit the seam and had Rishabh Pant leaping to collect it.

Batting fourth will not be easy, especially with Nathan Lyon – who took seven wickets at this venue a few weeks ago – looming large. Given that Vihari s innocuous offspin claimed the wickets of Marcus Harris (70) and Shaun Marsh (45), spin is indeed shaping to play a big role over the next couple of days.

Against this, the value of not losing early wickets had been far greater than what the scorecard showed at lunch and sure enough, the flow of wickets pegged Australia back after a century opening sand. After a lacklustre morning session in which they were down on pace and didn t bowl well in the first 45 minutes, Jasprit Bumrah and Ishant Sharma bowled excellently in the afternoon and evening on a tricky pitch. Harris and Finch put on 112 for the opening wicket while seeing out 26 overs in the morning, but India can claim to have taken the day s honours.

In the morning, while searching for swing, the quicks erred in line and allowed Harris and Finch to clip and drive without worry early on. The first 12 overs produced 45 runs, which is where India let Australia off the hook initially. The closest India came to a wicket in the morning was when Virat Kohli flung the ball from mid-off and Finch sprawled to make his crease.

In the first over after lunch, bowled by Mohammed Shami, Harris smoked two on-the-rise boundaries square on the offside. The one ball that separated those fours skidded under his bat at shin height. In Shami s new over, Harris again cracked a square drive for four and Finch followed. On came Vihari for some off spin and immediately Finch used his feet to hit the first two balls for four before raising his fifty off 103 balls.

On came Bumrah and with it the wicket, as Finch played all over a full delivery and was trapped plumb in front for 50. It had taken India 35.2 overs to strike on a stinking hot day.

Usman Khawaja never looked at ease during his 38-ball stay, which yielded five runs before he nibbled Umesh to Rishabh Pant 25 minutes before tea. And it wasn t swing or seam that ended Harris innings on 70 when he was surprised by a ball from Vihari that sat up and took the glove for slip to hold a simple catch. Dropped on 60 by KL Rahul at second slip off the consistently accurate and quick Shami, Harris added ten runs before Vihari got him.

The final session began with a wicket first ball as Peter Handscomb was excellently taken at second slip by Kohli, leaping to his right to grab the edge one-handed. Very next ball, Head was rattled by a shot ball from Ishant that came off the glove and evaded the slips for four.

That lifter aside, Head had few issues and looked the best of the batsmen. He drove and cut superbly and hurried to his half-century in 70 balls with a counter-attacking approached that produced six fours. Marsh – dropped by Pant on 24 off Vihari – aided him in a stand of 84 until three overs before the new ball was available he flashed at the off spinner ad was gobbled up by Ajinkya Rahane at slip.

Head kept finding the gaps as India s bowlers refrained from using the short balls, but to the first sighting of the new ball he chased width and sliced Ishant to third man. Head slumped over his bat, knowing that he had chucked away a terrific start. Few could have tipped Head to be Australia s leading run-getter of the series, but he has unquestionably been their best batsman so far. Such dismissals will rankle. 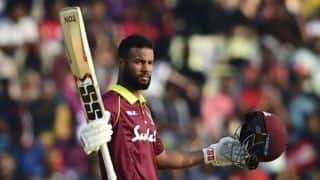