India scored 46 from the first hour and 23 from the second.

KL Rahul came back and got out, Mayank Agarwal continued the positive start to his Test career and Cheteshwar Pujara began to set the dining table for another watchful innings as India moved to 69/1 by the lunch interval on day one of the Sydney Test.

There was something in the SCG surface, carrying a bit of moisture in hot conditions under slightly overcast skies, and Australia s trio of fast bowlers tested Agarwal and Pujara regularly in a feisty morning session Thursday after Virat Kohli opted to bat. Agarwal, unlike his close friend Rahul, stood tall to combat whatever was flung his way while Pujara s seemingly unquenchable thirst for occupying the crease helped India lay the foundations for a good total.

Handed a lifeline with Rohit Sharma back in India for the birth of his daughter, Rahul got the chance to open with his Karnataka team-mate Agarwal but their alliance lasted just nine deliveries. Having squirted two fortuitous boundaries between the slips and gully, Rahul poked an edge to first sip to fall to Josh Hazlewood for the fourth time this series.

Hazlewood, Mitchell Starc and Pat Cummins found good pace and carry with the new ball to test Agarwal and Pujara. There was a fair bit of bounce – Pujara fended one ball from Starc away with one hand, Agarwal copped a blow to the chest – and several balls curved past the outer edge to ask questions of Agarwal and Pujara.

Agarwal was up for the challenge, despite looking ungainly and wearing a short ball from Hazlewood on the chest. His technique and temperament were tested and he passed the examination, no matter that he hopped and swayed and took his eyes off the ball. Whenever allowed to get onto the front foot, Agarwal happily did. Twice he collected pretty boundaries into the off side with a mere push, both times off Cummins. That gave Agarwal the confidence to drive Starc on the rise for four, the shot of the morning. The 50-run stand with Pujara also came up with a push into the offside.

As usual, there was little extravagance from Pujara. He patiently blocked and left deliveries, hung back most times and cashed in on the deliveries that were over-pitched or on the pads. Only once did he play a faulty drive, going hard at Hazlewood and watching as the ball nearly spooned to cover-point.

Australia used up a review in the 15th over when Pujara was beaten by a ball from Starc that jagged back in, the dots added up and Tim Paine kept shuffling the field, but given Pujara s powers of concentration there was little Australia could do to unsettle him. Even a short ball into the back of the neck just before lunch didn’t faze him.

India scored 46 from the first hour and just 23 from the second as the quicks operated in short-pitched mode with aggressive field placements. Nathan Lyon bowled two overs just before the break, and his overs are shaping up as potentially decisive after the fast men laid down the marker. 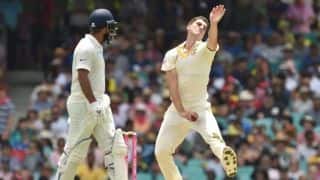