Cheteshwar Pujara featured in fifty stands for the second and third wickets at the SCG.

Playing his third Test innings, Mayank Agarwal drove India for a third time in row before falling for 77 to his own impetuosity, thus squandering the chance for a maiden hundred. His dedication to the opener s role, however, gave India a solid platform from where they can push for a decisive first-innings total.

By tea on day one of the Sydney Test, India reached 177/2 with Cheteshwar Pujara entrenched on 61 from 138 deliveries and Virat Kohli looking at ease with 23 off 56. (LIVE UPDATES: INDIA vs AUSTRALIA, 4th TEST)

If the morning session, which yielded 69 runs for the loss of KL Rahul for nine, was about India s batsmen weathering the storm of a short-pitched barrage, the afternoon passage saw them press forward while adding 108. Despite looking ungainly and wearing a short ball from Josh Hazlewood on the chest before lunch, Agarwal passed the examination of some sharp pace bowling and opened up after lunch.

The 27-year-old brought up his second Test fifty with a fine push into the off side off Mitchell Starc for four, and then repeated the shot off the back foot for three more. Off the next ball, Agarwal controlled a rolled-wrist swat past square leg for for four when Pat Cummins banged it in. The bowler responded with a sharper delivery that clapped Agarwal s knuckles. The next ball was full and driven with a straight bat past the stumps for two.

On came Nathan Lyon, and to his first ball Agarwal advanced and cleared long-on for six. A second six off Lyon was even bigger and took Agarwal past his previous best of 76, but repeating the shot two balls later he found Starc at long-on. Having toughed out the morning session, during which Australia s trio of fast bowlers banged in bouncers that made the heart-rate flutter, Agarwal threw away a maiden century with that needless shot.

What his partnership of 116 with Pujara did, apart from giving India a platform, was allow Kohli 34 overs to remain inside the dressing room. The India captain opened his account with a purring drive past extra-cover for four,

At the other end was Pujara, quite content to leave everything outside off stump. He was no in rush to try and push the scoring rate against accurate bowling, and as usual there was little extravagance. He patiently blocked and left deliveries, hung back most times and cashed in on the deliveries that were over-pitched or on the pads. His patience bore fruit just before lunch, when three half-trackers in the first over from Marnus Labuschagne were put away for four. This moved Pujara from 49 to 61 in the span of six balls. This innings has taken his crease time in the series past 25 hours.

As well as Australia’s specialist quarter bowled, it is because of Agarwal and Pujara that the hosts have not been allowed to dictate terms. 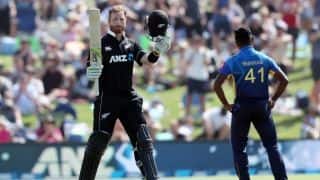 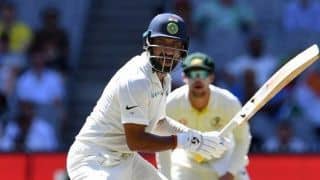