Assisting Pujara on day one were Mayank Agarwal (77) and Hanuma Vihari (39*).

A day of to and fro at the Sydney Cricket Ground drew to a close with India claiming the honours Thursday thanks once again to Cheteshwar Pujara, who succeeded where all but two of his colleagues failed. With 303/4 on the board, this represent’s India’s most successful day of the tour in terms of runs scored.

It was, in the end, about Pujara (130*) who has been India s banker batsman all series in what has proven to be his best overseas tour. Today he brought up his 18th Test hundred and third of the series, taking his returns to 458 at an average of 76.33 as he completed 28 hours of batting in seven innings while facing over 1000 deliveries.

In a bygone era, such figures would have been sufficient to earn Pujara cult status.

By stumps, Hanuma Vihari also loomed as a crucial figure, unbeaten on 39 from 58 deliveries to give the lower order a chance to push the total past 400. (AS IT HAPPENED: INDIA vs AUSTRALIA, 4th TEST)

Australia s pace trio put in a very fine effort – if somewhat unrewarding – bowling accurately with the new ball under overcast skies and then getting some help from the pitch after tea to surprise Virat Kohli and Ajinkya Rahane with bounce. Nothing could dislodge Pujara, however. From the time he walked in to bat in the second over after the recalled KL Rahul edged to first slip for 9, Pujara laid out the model for how to build a Test innings when the ball is doing stuff. It helped that he had Mayank Agarwal for company, who helped fashion India s biggest stand of the day (116) while weathering the storm of a short-pitched barrage in a morning session that yielded 69 runs.

As is his wont, Pujara was quite content to leave everything outside off stump. He was no in rush to try and push the scoring rate against accurate bowling, and as usual there was little extravagance. He patiently blocked and left deliveries, hung back most times and cashed in on the deliveries that were over-pitched or on the pads.

Despite looking ungainly and wearing a short ball from Josh Hazlewood on the chest before lunch, Agarwal passed the examination of some sharp pace bowling to produce an attractive 77 before falling to his own impetuosity, thus squandering the chance for a maiden hundred. Having toughed out the morning session, during which Australia s trio of fast bowlers banged in bouncers that made the heart-rate flutter, Agarwal found long-on when searching for a second six off Nathan Lyon.

What his partnership with Pujara did, apart from giving India a platform, was allow Kohli 34 overs to remain inside the dressing room.

Pujara was rarely troubled, barring one ball which he fended with one hand and another that struck him on the back of the neck, which is credit to his technique and judgement because Australia s pace bowlers were excellent during the morning session and in the hour before tea. As he has done all series, Pujara did not chase width or misjudge movement and played late and close to his body.

As for run-scoring, his driving was a particular treat as he picked the gaps through the off side and punched straight past the stumps with crispness. Pujara s handling of Lyon, tellingly, came via his ability to work the ball through midwicket. His patience bore fruit just before lunch, when three half-trackers in the first over from Marnus Labuschagne were put away for four. This moved Pujara from 49 to 61 in the span of six balls.

Moments into the final session, Australia found a breakthrough when Kohli was strangled down the leg side by Hazlewood, tickling a catch to Tim Paine. Rahane s struggles continued when he got a brute of a delivery from Mitchell Starc which he nicked to Paine for 18 to give Australia more lift.

With Starc operating from around the stumps, Pujara collected back-to-back fours: a whip past mid-on followed by a punch off the back foot past point to move to 92. The move from 92 to his hundred took some time, and came when he twirled Start to fine leg where a midfield gave him four. Off came the helmet as Pujara punched his right fist in animation towards the Indian balcony.

To celebrate, Pujara sashayed out and drilled Lyon past the stumps for four and then heaved a full toss from Labuschagne over midwicket. As well as Australia’s specialist quartet bowled, it is because of Pujara that the hosts have not been allowed to dictate terms.

Back at No 6, Vihari looked far more confident than he did opening the innings at the MCG and coolly moved himself to 39 by stumps while adding 75 with Pujara. Vihari’s offside play was punchy, highlighted by forceful boundaries off Starc and Cummins not long before the close of play, and like Agarwal he too survived a short-ball attack. 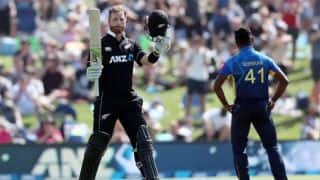 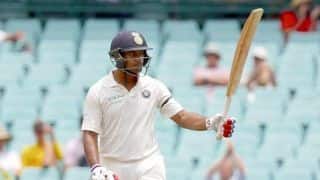