Buoyed by fifties to Agarwal and Pujara and 47* from Kohli, India reached 215/2 at stumps.

Half-centuries to the debutant opener Mayank Agarwal and Cheteshwar Pujara and an unbeaten 47 from Virat Kohli have carried India to 215/2 on day one of the Boxing Day Test at the Melbourne Cricket Ground, on the friendliest batting surface of the series, to leave Australia facing a mountain to climb.

Agarwal s agenda-setting 76 is the sixth score of 50 or more by an Indian Test debutant opener in their first innings, and the highest score by one making his debut in Australia. The 27-year-old allayed fears of another top-order wobble by leading an opening stand of 40 in 18.5 overs – the longest any India opening pair has batted in SENA (South Africa, England, New Zealand, Australia) countries since July 2011 – with Hanuma Vihari, and then put on 83 in 36 overs with Pujara.

In batting 161 balls – or 54.5 overs – Agarwal helped keep Kohli in the dressing room until after tea, and the captain complimented the effort by producing a quietly dangerous 47 off 107 balls. Pujara did what Pujara does in entrenching himself to 68 from 200 deliveries by stumps.

The MCG pitch, the subject of much speculation over the past few days, lived upto its reputation of being a batting beauty. This allowed India to make their most comfortable progress of the series, each hour pushing Australia into desperation. To their credit, the bowlers did not concede easy runs on a very hot day. India scored 57 runs in the morning session, 70 between lunch and tea and 92 in the evening.

Agarwal s has been a long overdue selection and to the selectors credit, his skill and determination – albeit on an easy batting deck – made the pair who did the job in Adelaide and Perth appear like novices. Agarwal was positive, using his feet well and playing the quicks and Nathan Lyon with a straight bat. He got off the mark fourth ball with a push into the covers for three off Josh Hazlewood, then clipped him for three off the toes. His first boundary in Test cricket came via an outside edge off Mitchell Starc past gully, but the sight of Lyon settled him. In the offspinner s first over, he slapped a drive into the covers. Later, Lyon floated it wider and Agarwal cracked another four with the panache of Kohli.

Pushed into an unfamiliar and difficult task, albeit on a good batting deck, Vihari was more tentative, playing and missing early on and scoring his first run off his 25th ball faced. He had troubles against Pat Cummins, who pinged a short ball into Vihari s helmet which necessitated a visit from India s physio and then extracted him with a superbly directed bouncer. Vihari faced 66 balls for his eight runs.

It took a very good short ball from Cummins to end Agarwal s innings: on the stroke of tea, he nibbled a well-directed delivery off his ribs and was taken by Tim Paine down the leg side.

Apart from an inside edge off Mitchell Marsh that ballooned towards gully where a diving Usman Khawaja just failed to get to, Pujara barely played a false shot. Pujara didn t need to reminded that a big innings was possible on this MCG surface, and duly added 92 with Kohli to ensure there would be no late-evening hiccups. He dealt almost exclusively in pushed and deflections, and relied on that hallmark mental fortitude to pile on the pressure. It was another Pujara effort of limitless concentration, and the increasing authority with which he has batted does not augur well for Australia.

Kohli s contribution was a controlled 47 not out, in which he left the ball with certainty outside off stumps and forced the Australians to bowl to his strengths. Kohli s driving was as usual gorgeous, with two drives past mid-on off Hazlewood and Marsh particularly pleasing on the eye. Late in the day, Kohli, on 47, flashed at the new ball and was spilled by a diving Paine in front of first slip. It denied Starc a wicket during a high-octane spell of pace and swing and summed up the day Australia had. 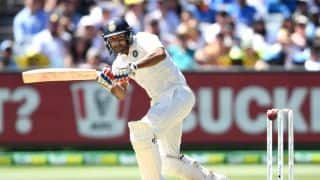