Spearheaded by a superlative bowling display from Jasprit Bumrah on Monday, Virat Kohli’s Indian cricket team has become the first from the country to start a tour of Australia with victory in the first Test, beating Tim Paine‘s home side by 31 runs on day five at Adelaide Oval.

It wasn’t easy, because Australia’s last four added 107 runs to take them to within one ball of tea. Off the last ball of an extended session, the last man Josh Hazlewood poked at R Ashwin and was well taken at second slip by KL Rahul. The look on Kohli’s face said it all: it was a historic win, but one that should have come earlier.

AS IT HAPPENED: DAY FIVE, ADELAIDE

India needed six wickets and Australia 219 runs when play began in sunny conditions on Friday, and it took them 71 long overs to do so. On a day in which Ashwin was lacklustre, Bumrah carried India tremendously while making inroads each time Kohli summoned him. His removal of the second-most-capped batsman in this Australian squad, Shaun Marsh, the skipper Paine and Pat Cummins in three separate spells proved massive, and without his strikes the result could have been different.

Though he put down two leaping catches, Rishabh Pant – in his sixth Test – equaled the world record for most catches in a Test, holding 11 to draw level with Jack Russell and AB de Villiers and become the first Indian to hold as many. His chatter behind the stumps when Cummins was batting was a hoot, too.

India got the first breakthrough from Ishant Sharma who bounced out Travis Head for 14 with a lifter that caught the left-hand batsman by surprise to fend the ball to gully. Marsh s first half-century in 14 innings kept Australia alive and India searching for the sixth wicket, while raising visions of an Australian victory.

Blocking out a chirpy Pant behind the stumps – no intent to win this match wonderful, Ashley bowling, Vij – Marsh, who in Australia s first innings made 2 off 19 balls, his fifth consecutive single-digit score in Tests an unwanted record – dug deep into his reservoir of experience to summon great powers of application. He tucked, nudged, flicked and then some more. He defended tightly, back and across. He had a few troubles against Ashwin initially – the man he s fallen to five times in Tests – but survived, each time getting a bigger stride forward and bringing his wrists into play.

With the first ball of the third over of a new spell, Bumrah dislodged Marsh (60) with the faintest of edges that Pant held onto for his ninth catch of the match. It needed something special to end such a resilient innings from Marsh and Bumrah produced it, the shape of the ball forcing the batsman to poke at it.

VIDEO: Pant takes over commentary for an entire over as he sledges Cummins

Paine, on seven, glanced Mohammed Shami down the pads and Pant failed to latch on to a diving catch. The new ball brought a couple close shouts as Ishant got it to wobble and lift, and not long into the afternoon session Bumrah banged one in and had Paine top-edging to Pant, who held his tenth catch to draw level with the Indian record owned by Wriddhiman Saha.

A 41-run stand between Cummins (38) and Mitchell Starc (28) followed to frustrate India, until Shami returned to have the latter nicking off to Pant. With that dismissal, Pant – in his sixth game – became the first Indian wicketkeeper and third overall to hold 11 catches in a Test.

Cummins, having successfully reviewed a bat-pad decision to give umpire Nigel Llong his fourth incorrect decision of the Test, displayed tremendous application. He blunted Ashwin with an excellent forward defensive, used his height to play the quicks well and flicked well when the ball was too full. Rahul put down a tough catch at short leg off Ashwin when Cummins was on 19, but the drop did not cost a lot.

In the third over of another spell, Bumrah had his man when Cummins poked and edged to Kohli at first slip. Cummins faced 121 balls, his longest Test innings. Nathan Lyon and Hazlewood all displayed commendable resistance in keeping India waiting so long for a famous win. After six wickets in India’s second innings, Lyon made 38 not out from 47 balls. 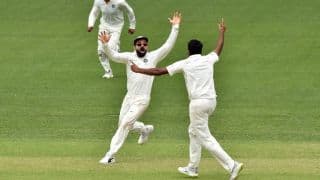