The overnight pair increased their alliance to 154, leaving Australia searching for a wicket.

A wicketless session on day two of the third Test at the MCG has seen India extend their total to 277/2 by lunch, with Cheteshwar Pujara securing his 17th hundred and Virat Kohli firmly in sight of his 26th.

The overnight pair increased their alliance to 154, leaving Australia searching for a wicket for 62.1 overs.

Two wicketless sessions in a row on a flat track. India remain in charge, with the promise of quick runs later in the day.

Pujara moved from 68 to his hundred and has faced 294 balls so far, while adopting the same approach as he had on day one. He nudged, deflected and left with confidence and his twinkle-toed brilliance to Nathan Lyon nullified the threat of the offspinner. A fierce square-drive for four off Mitchell Starc wide of point put him into the eighties, an even better shot wide of mid-on for four off Lyon got him into the nineties. A flourishing punch past mid-off took him from 96 to 100, which sparked a broad smile and acknowledgement of an MCG Test hundred. Two hundreds in three Tests in Australia are a considerable feat of concentration and determination.

Kohli was in no hurry either. He was made slightly uncomfortable during a testing spell by Pat Cummins, who beat the edge numerous times with a series of well-directed swinging deliveries at pace. When Cummins dragged back the length, Kohli was forced to stand tall and deflect the ball. There were no shots of bravado against Cummins, but that did not perturb Kohli for he and Pujara were determined to see out the session.

One whistling on-drive for four past Pujara off Mitchell Starc was gasp-inducing, but overall this was a subdued Kohli. Pujara marched to his century, and Kohli has his eye on joining him. 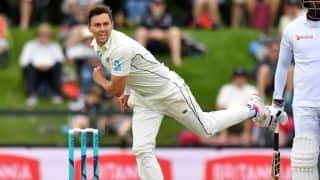