It wasn’t easy, but India bounced back from losing the T20I series to Australia by taking the series lead with a six-wicket win over Australia in Hyderabad on Saturday.

Chasing a target of 237, India struggled on on surface with variable bounce on which cross-seam deliveries caused problems, and were indebted to MS Dhoni and Kedar Jadhav who revived a tricky chase from 99/4 in a match-winning partnership of 141. (FULL SCORECARD: INDIA vs AUSTRALIA, 1st ODI)

Dhoni and Jadhav were joined in the 24th over after India had lost two wickets for four runs in 21 balls and built on their camaraderie – they are good friends off the field and IPL team-mates as well – to stem Australia’s charge. Jadhav finished not out on 81 off 87 deliveries, Dhoni on 59 from 72 – his third unbeaten ODI fifty in a row against Australia this year. Each of them has completed a successful chase for India. (AS IT HAPPENED: INDIA vs AUSTRALIA, 1st ODI)

This one began on a sour note as Shikhar Dhawan steered his first ball to point, after which Virat Kohli and Rohit Sharma were tested by a series of accurate cutters and pacy deliveries from Jason Behrendorff and Pat Cummins. Rohit broke the rut by padding-scooping Behrendorff for four. Cummins tried a short ball and in a flash, Kohli nailed a pull shot for six over deep square leg. Then he walked out to Behrendorff and drilled the ball between the stumps and mid-on. The chase had revved to live.

The 50-run stand consumed 70 deliveries, which was made to seem breezy as Kohli accelerated against Adam Zampa whom he hit for three fours in consecutive overs. Then he played forward to a well flighted ball and was out lbw, with Australia reviewing the original decision. Kohli made 44 off 45 balls.

Nathan Coulter-Nile returned for a second spell and claimed his second wicket as Rohit was undone by the slowness of the surface, getting a big leading edge that settled at mid-off. His 37 off 66 balls underlined the manner in which Rohit struggled on this surface. Zampa then got Ambati Rayudu caught behind for 13 with a smart legbreak, leaving India 99/4.

Rayudu muscled a four over midwicket to relieve a bit of tension created by Zampa, then went inside-out through extra cover. Singles came through nudges and deflections off the hips as Aaron Finch rotated his pace bowlers. Dhoni was rapped on the gloves and Jadhav pushed back by incutters, while inside-edges skirted away. Jadhav and Dhoni, in successive overs, managed to pull boundaries to deep midwicket.

Then Dhoni glanced a four, lofted a six over long-on and collected another boundary via a leading edge and the momentum had truly been shifted.

Jadhav reached his half-century in 67 balls, Dhoni brought up his in 68 and the finish was a formality as Jadhav began to hit the ball over the infield.

That India had to chase 237 owed largely to Mohammed Shami and Kuldeep Yadav took two wickets each, as well as Ravindra Jadeja who wheeled through his ten overs while conceding just 33 runs.

Finch began his 100th ODI by winning the toss and opting to bat, but his excitement was quickly quelled as he nicked his third ball faced from Jasprit Bumrah to Dhoni to leave Australia 0/1 in the second over. Usman Khawaja and Marcus Stoinis were kept quiet through in the eight overs that Bumrah and Shami (4-2-6-0) bowled in tandem, but the introduction Vijay Shankar allowed them to score easily. Stoinis took four fours off Shankar’s gentle medium-pace, the pick of them a powerful drive past mid-off, and Khawaja stepped out to launch Kuldeep for six in his first over.

The pair put on 87 until Jadhav’s side-on, slingy variety of spin produced the breakthrough. Stoinis, on 37, pulled his 53rd ball – a dirty half-tracker – straight to midwicket. Khawaja eased to his fifty in 74 balls and promptly fell when he skipped out to Kuldeep and lofted the ball out to cow corner where Shankar held a good sliding catch.

With Peter Handscomb, Glenn Maxwell added 36 in 37 balls before Handscomb was duped by a lovely flighted delivery from Kuldeep that broke in and had him stranded well down the track to be stumped.

Maxwell’s deftness meshed with power saw him drive the spinners delectably into the covers and past the stumps, but the steady flow of wickets from one end kept India encouraged. The debutant Ashton Turner got to 21 off 23 balls before he inside-edged Shami onto his stumps, which was reward for the bowler who Turner swatted for a stunning six. Then came the wicket India really needed: Shami pitched one up, got it to shape in and Maxwell was bowled for 40. 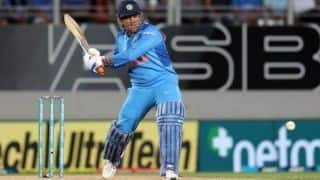 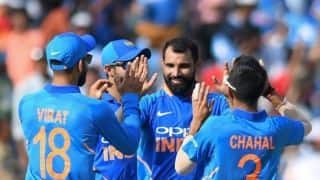