Khawaja and Paine have dug in taking Australia to 132/4, with a lead of 175 over India.

When Travis Head departed slashing a wide one off Mohammad Shami s first ball of a new spell late on day three, that was the second time in the match that the No.6 Australian batsman was caught at third man.

What that shot, and the subsequent dismissal, did for the 2nd Test at the Optus Stadium was to throw it wide open. In the first session on day three, Virat Kohli s brilliant 123 had helped India edge ahead before Nathan Lyon s five-for wrestled the momentum back for the home team in the second session.

ALSO READ: Virat Kohli scores 25th Test century and with that achieves a host of milestones

Australia, with a lead of 43, did well to take tea at 33/0, but they had lost Aaron Finch to finger injury. Jasprit Bumrah, Ishant Sharma and Shami then put in a session of such hostility that the highlight packages of the day will have Australian batsmen ducking and jumping around more than the shots they connected.

The sustained pressure got to Marcus Harris (20), Peter Handscomb (13) and then finally to Head (19). With Finch almost certain not to return, Australia are left with their last recognised batting pair in Usman Khawaja (41*) and skipper Tim Paine (8*), with just a slender lead.

However, Khawaja and Paine have dug in taking Australia to 132/4, with a lead of 175 over India.

With two more days play left in the match there is no doubting that a result is certain, and if Australia hope to make it 1-1 in the series Khawaja and Paine will have to bat at least one more session taking the lead to the vicinity of 300.

On the other hand, Indian bowlers, who bowled marvelously well without much luck can only hope for one of those wild seaming deliveries to take a faint edge.

Earlier, starting the day at 172/3, India were dented early with Ajinkya Rahane s dismissal but the confidence and the assurance with which Vihari batted with Kohli, adding 50 runs for the fifth wicket, helped India remain ahead and in view of Australia s first innings total of 326. Kohli was aggressive right from the onset waiting for the bad balls to be put away. Mitchell Starc, in search of swing, pitched quite a few deliveries up and Kohli took boundaries at will.

Vihari, at the other end, too did not shy away from playing his shots and slashed hard outside off to move to 20 off 46 balls. Kohli rotated the strike well and with a boundary off Lyon got to the 90s.

Then he punched one off Starc, when on 96, to get to his 25th Test century, the second fastest to reach the milestone in 127 innings, bettering Sachin Tendulkar (130).

He even got a six over third man off a wide one from Cummins, but he lost Vihari to a peach of a delivery from Josh Hazlewood. With India reducing the lead to under 100, Australia needed something special to maintain their edge and that was provided by Handscomb at wide slip when he managed to get his fingers underneath the dying ball that was edged by Kohli off Cummins.

Umpires went upstairs for confirmation as Kohli seemed confident that the ball had bounced before Handscomb caught it. But, because the on-field umpire Kumar Dharmasena’s soft signal was out and third umpire Nigel Llong didn t have any conclusive evidence to overturn that, Kohli had to depart.

In the next over, Lyon had Mohammed Shami edging one to Paine for a golden duck, to signal the end of the session.

Resuming the second session on 251/7, India lost their eighth wicket to Lyon when Ishant played one back to the bowler. Umesh Yadav hung around for a while with Rishabh Pant as the Delhi batsman tried to up the ante, but was beaten for pace, repeatedly, by Starc and Cummins.

However, the duo managed to add 25 runs with Pant taking on Lyon for a huge six and a four before perishing to the off-spinner for 36 off 50 balls. Lyon then wrapped up India s innings at 283 when Bumrah edged one to Khawaja at slips.

In reply, Finch and Harris were in for a hard time as Bumrah and Ishant used the back of length deliveries to extract enough bounce and zip off the pitch. Harris copped one on the helmet and numerous others hit high on his bat. Finch struggled to deal with the incoming deliveries, but unfortunately for India, the breakthrough never came.

Harris was squared by early in his innings by Bumrah, but the edge was grassed by Cheteshwar Pujara at first slips. However, the replays suggested that had Pant held his ground and not shuffled across, the wicketkeeper could have had an easy grab at it.

At the stroke of lunch, Finch got one on his fingers from Shami and had to retire hurt, thus signalling the close of the session. 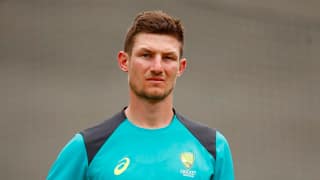 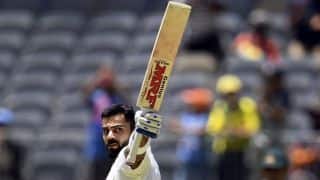