Even though a defiant Pat Cummins took the Boxing Day Test to final day at the Melbourne Cricket Ground, Melbourne, it was just a matter of time before India wrapped up a famous win. Rain did keep Australia’s hopes lingering wiping out the the entire first session, but as soon as the play resumed – in the second session – India needed just 5.3 overs to bowl out Australia for 261, claiming the match by 137 runs and take a 2-1 series lead.

Jasprit Bumrah got rid of Cummins in the fourth over of the day when he edge one to slips and Cheteshwar Pujara obliged. Cummins vigil of 114 balls came to an end and in the next over, Ishant Sharma bumped out Nathan Lyon and Rishabh Pant took the easiest India needed just 5.3 overs to bowl out Australia for 261, claiming the match by 137 runs and take a 2-1 series lead. of catches to signal the end of the match.

This was India’s 150th win in Test cricket and heading in to Sydney for the final Test, starting January 3, India can claim their first ever series win in Australia, if they manage at least a draw at the Sydney Cricket Ground.

India were disciplined with the rock solid number three Cheteshwar Pujara scoring another century in the first innings and Kohli showing restraint and composure, while debutant Mayank Agarwal impressed at the top of the order with 76 in his first Test knock.

The bedrock for India’s victory was their 443 for seven declared in the first innings, built on the back of Pujara’s 106 and Kohli’s 82.

Spearheaded by the young Bumrah, who reinforced his reputation as one of the world’s top bowlers, Australia were then skittled for just 151.

Kohli declared India’s second innings on 106 for eight, leaving Australia the virtual mission impossible of scoring 399 to win or surviving almost two days for a draw.

Aaron Finch again flopped at the top of the order, throwing his role as a Test opener under more scrutiny with growing speculation that he will be axed.

He played a poor shot to Bumrah and was caught by Kohli for three.

Fellow opener Marcus Harris followed him back to the pavilion for 13 with Usman Khawaja the next to go after a lively 33.

When Shaun Marsh was also trapped leg before by Bumrah for a brisk 44 and his brother Mitch — another candidate for the Sydney chop — fell for 10, Australia’s faint survival hopes were fading fast.

Travis Head put up some resistance with a battling 34 before his stumps were knocked over by Ishant Sharma and when skipper Tim Paine went for 26 it appeared all but over — until Cummins dug in to take the game into a fifth day. 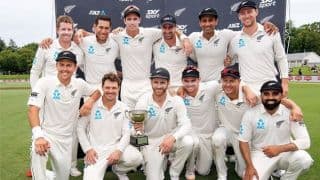