Australia threw away a good start after Kuldeep, Jadeja combined to pick five wickets to out India on top.

Having played out a fine morning session, Australia were pushed back by India, who dealt the hosts five big blows to undo the work of their top order. On the best batting surface of the series, Australia, courtesy their fragile middle order, reached 236 for 6 before bad light and heavy rain brought an early end to the third day’s play at the Sydney Cricket Ground on Saturday. (LIVE UPDATES: INDIA vs AUSTRALIA, DAY THREE)

India picked up four wickets post lunch, and one the over after it. And it was once again up to Pat Cummins, along with Peter Handscomb to restore order. Having added 38 unbeaten runs for the seventh wicket, you can say that it’s a start, but with Australia still needing 187 more to avoid follow-on, India look likely to make it 3-1. The weather however, remains an influence. With conditions getting darker and more overcast, the umpires decided to leave the field before the heavens opened. Australia will begin Day 4 half an hour early, still behind India by 386 runs.

The second new ball was due for India, but since conditions weren’t bright enough, they decided not to take it with Kuldeep Yadav and Ravindra Jadeja doing the bulk of bowling in the final half hour of play. (LUNCH: MARCUS HARRIS DRIVES AUSTRALIA TO 122/1)

The second session is where India dropped the ball in their court, picking up four wickets for 76 runs. Marcus Harris, set score for his maiden Test century fell 21 runs short of it when he chopped a delivery from Jadeja onto his stumps. Having reached 79, the highest score of the series by an Australia batsman, Harris decided to cut the left-arm spinner when there was virtually no room. Shaun Marsh, who had shown signs of spark in Melbourne, played a loose defensive shot and edged Jadeja to Ajinkya Rahane at slip.

Playing his first Test of the series, Marnus Labuschagne had played confidently to score 38, but like Harris, he too threw away a promising start. He took on Mohammed Shami playing him with ease, driving him through the covers and down the ground and slicing him towards the third-man boundary. The flick shot however is one he failed to get complete control of as a diving Rahane held on to a low, sharp catch at short midwicket.

At 152 for 4, Tavis Head and Handscomb were yet to open their account, but successfully played out a challenging spell by Jadeja and Shami and added 40 runs for the fifth wicket. But India had one more wicket-taking delivery left in the session. A pretty ordinary one, a full toss that Head hit back to Kuldeep in the penultimate over of the second session. Australia had lost five wickets in one session. Kuldeep did not stop there. First over after tea, he breached Australia captain Tim Paine‘s ambitious cover drive to castle him.

In hindsight, Australia would be extremely disappointing to waste a good start. Harris had taken up the challenge and moved step by step to lay the foundations for a big inning. He dominated an opening stand of 72 with Usman Khawaja, reached his second Test fifty in quick time and in the company of Labuschagne added 50.

Channelling the man he resembles when batting, David Warner, Harris did not let the bowlers stifle him. He had a close shout when he lofted Jadeja to mid-on where Rahul leaped to his right to attempt the catch, but the fielder immediately signalled not out as soon as he rose. That brief heart-in-mouth moment out of the way, Harris set about constructing a busy half-century. His approach to the spinners was upbeat as he collected his fifty off 67 balls. He grew increasingly confident, hammering Kuldeep over mid-on twice in an over, with a coruscating flat-batted pull sandwiched between those confident shimmies.

Shami was hit out of the attack with two fours in one over, and then Harris used his feet to crash Jadeja through the covers. He rotated strike cleverly too, an attempt to try and make the bowlers keep changing their lines. With Khawaja helping set the tone by skipping out to Jadeja over mid-off and reverse-sweep with authority, Australia scored 31 runs between the 15th and 19th overs.

Giving Harris company was Labuschagne, who during his 95-ball stay, had looked supremely confident. Given a big opportunity at No 3, he nailed a confident drive through extra cover for four off Kuldeep and to the spinner used his reach well. He repeatedly swept Kuldeep with power, which kept Hanuma Vihari at short leg constantly wary.

Khawaja, who was let off by Rishabh Pant when zero on Friday evening, briefly showed signs of emerging from his stupor but fell for 27 when trying to dominate Kuldeep, offering a catch to midwicket. 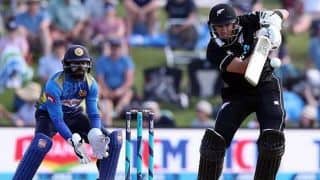