Australia inflicted a series defeat on the World No.2 side in their final ODI series before the 2019 ICC Cricket World Cup, winning their first ODI series since 2017 and their first in India in a decade.

Australia created history at the Feroz Shah Kotla clinching the five-match ODI series against India 3-2 with a 35-run win in the decider on Wednesday; and what makes this achievement even more special for this Aaron-Finch led side is the fact that his team is the only one now to have beaten India in a five-match ODI series after being down 0-2. (SCORECARD: India vs Australia, 5th ODI)

Seldom in their cricketing history Australia have walked in to a series as the underdogs, but they walk out with the heads held high, inflicting a series defeat on the World No.2 side in their final ODI series before the 2019 ICC Cricket World Cup. Australia won their first ODI series since 2017 and their first in India in a decade. (ALSO READ: Partnership between Richardson and Cummins was really good: Usman Khawaja)

The turnaround that started in the third ODI at Ranchi was completed in New Delhi with Australia outplaying India both with the bat and the ball. Usman Khawaja compiled a 106-ball 100-run knock – his 2nd ODI century – while it was leg spinner Adam Zampa, in association with Pat Cummins, that deflated the Indian batting line-up, which for some strange reason was an experimental one at best.

After winning the toss, Australia were limited to 272/9 – after Khwaja, Finch and Peter Handscomb had helped the team to a formidable 175/1 in 32.5 overs – losing their last eight wickets for just 97 runs. Bhuvneshwar Kumar was tidy returning 3/48, while Mohammed Shami and Ravindra Jadeja added two each.

However, the Indian batting was stifled by the ever impressive Cummins and Jhye Richardson early on, before Marcus Stoinis medium pace accounted for the key wicket of Virat Kohli for just 20. Rohit Sharma, labouring his way to 56 off 89 balls, saw four of his teammates succumb to Australian bowlers discipline, before he himself lost focus dancing down the track to Zampa, only to lose his wicket and his bat in the process. This after he was dropped twice in as many overs by wicketkeeper Alex Carey and Glenn Maxwell at short extra cover.

With one batsman short, India s tail, starting with Jadeja – because his batting has been non-existent in the format – was exposed. Jadeja was stumped for three by Zampa in the same over as Rohit s departure, before Kedar Jadhav (44) and Bhuvneshwar (46) showed some fight to take the match deep with a stand of 91 runs in 18.4 overs. They even threatened to run away with the game but with their back-to-back departures in the in the 46th and 47th overs, Australia sealed the deal.

Australia were aided by the slow nature of the Kotla track which was exploited with aplomb by Cummins who sent down ten overs to give away only 38 runs and took two wickets. Nathan Lyon, drafted in place of Jason Behrendorff gave away just 34 in his ten while Zampa claimed 3/46 in his ten.

India did not have the best of starts, losing Shikhar Dhawan (12), last match s centurion, to Cummins when he edged one to Carey in the fifth over, before Kohli slashed at a wide one – on any other track in India that ball would have fizzed past cover – but at the slow Kotla track, the skipper managed an edge behind the stumps.

Pant was promoted up the order at number four and while he hit a four and a six, he was foxed by a Lyon delivery that drew Pant forward only to spin away and take the outside edge which was taken easily by Ashton Turner at slips – by the 18th over three hometown players were back in the pavilion.

Vijay Shankar, who had a golden opportunity to prove his credentials as a batsman, but once again, the slowness of the pitch induced a false shot of short delivery from Zampa, which was pouched at deep mid by Khawaja.

Earlier, Khawaja had continued his good form with the bat registering his fourth fifty plus score of the series. With skipper Finch (27), he put on 76 runs for the opening wicket and then with Handscomb scored at a quick pace, adding 99 runs in 18.3 overs for the second wicket.

India got their first breakthrough with the bowling change of Jadeja in the form of Finch in the 15th over. Handscomb was up and running with two consecutive sweeps for fours off Kuldeep. Handscomb and Khawaja s plan against the spinners was simple whenever the ball was pitched up, they went for sweep and the duo went about their business in a measured manner, taking their team past the 150-run mark by the 27th over.

Khawaja got to his hundred with a single past covers, but got out at the wrong time with India breaking the threatening stand with the bowling change of Bhuvneshwar. Khawaja drove an outside off stump delivery straight to the hands of Kohli at short extra cover.

India mounted a comeback after that, with Jadeja removing Maxwell, caught by Kohli at extra cover, while Shami removed the well-set Handscomb for 52. However, Richardson took 19 runs off Jasprit Bumrah s ninth over and got together for a crucial stand 34 runs for the eighth wicket, helping Australia to a good total, which eventually proved enough. 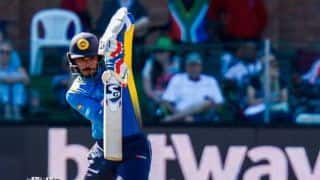 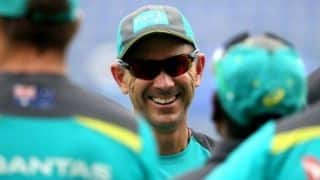