Fifties to Harry Nielsen and Aaron Hardie in a century stand for the seventh wicket took the CA XI to 356/6 at stumps.

On a day in which the teenaged batsman Prithvi Shaw suffered a nasty ankle injury that has ruled him out of the first Test between India and Australia next week, the touring team was made to struggle against a Cricket Australia XI as the seventh-wicket pair of Harry Neilsen and teenaged allrounder Aaron Hardie put on 118 in 35.3 overs.

After the CA XI openers D Arcy Short and Max Bryant hit fifties in a century opening stand in quick time, Nielsen and Hardie – who on Thursday claimed four wickets, including that of Virat Kohli – collected half-centuries of their own to take the total to 356/6 by stumps at the SCG, just two runs behind India.

R Ashwin was the pick of the bowlers, wheeling down 24 overs in which he picked up 1/63, while Mohammed Shami was the most prosperous with 3/67 from 18.

The start of the third day began on a sloppy note as from 24 without loss overnight, the Short, a regular in Australia s limited-overs sides, and teenage sensation Bryant plundered easy runs to extend their stand to 114 before the latter was bowled by Ashwin in the 19th over. Bryant, who in September smashed the fastest half-century for Queensland in List A cricket, off 23 balls, and who recently hastened CA XI s recent win over South Africa in a T20 warm-up game, hit nine fours and a six during his 65-ball 62.

That six came when he miscued a shot out to deep midwicket where Shaw stationed himself under the catch and took it, but rolled his left ankle nastily and parried the ball over the boundary as he fell. The medical teams of both the Indian and CA XI setups ran to check on Shaw, and that he was then carried off the field by India s physiotherapist Patrick Farhart and a member of the SCG support staff member.

Shaw was taken to a Sydney hospital for scans and later returned with a strapped left ankle and with the assistance of crutches. The BCCI later announced that he had suffered a lateral ligament injury and will not play the Adelaide Test.

Bryant s eventual dismissal to Ashwin, dancing down the pitch but missing the ball to be bowled, was followed by Short being caught down the leg side when attempting to hook Shami on 74 from 91 balls at 153/2, after which India found breakthroughs to check the CA XI s progress. The Western Australia batsman Sam Whiteman, leading the side, was third out when he chased an away-going delivery from Umesh Yadav for Rishabh Pant to hold his second catch.

A silly mix-up between Param Upall and Jake Carder saw the India-born New South Wales prospect run out when he pushed the ball to mid-on and set off, only to sent back. Ashwin returned a good throw and a sprawling Uppal was caught short on 5. Carder got to 38 before he was bowled by Shami, who improved as the day progressed and was rewarded with a third wicket during the final session when he induced an edge from Jonathan Merlo as the CA XI lost their sixth at 234.

The wicketkeeper Neilsen (56*) and Hardie (69*) thwarted India’s march in a stand that featured some confidence-coated hitting. Neilsen hit four fours and Hardie eight fours and one six. 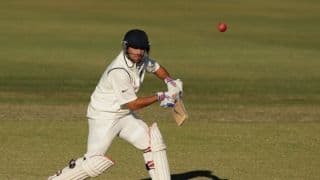