A record total of 219/6 in Wellington proved far too great for India to chase.

The highest total in T20Is at Wellington’s Westpac Stadium proved too far from India‘s grasp as New Zealand claimed the first T20I by a crushing 80 runs.

This represents New Zealand’s biggest win, in terms of runs, over India, and the Indian team’s worst ever loss in T20Is.

Put into bat by Rohit Sharma, New Zealand’s batsmen operated in singular mode – see ball, hit ball – to punish India’s attack en route to a record 219/6 in the first T20I on Wednesday. The visitors never came near, with four wickets in the span of 17 balls, with two each in an over to Mitchell Santner and Ish Sodhi, irrevocably putting an end to a tepid chase that ended on 139 in 19.2 overs. (AS IT HAPPENED: INDIA vs NEW ZEALAND, 1st T20I)

In contrast, India’s top seven managed 109 runs between them of which MS Dhoni’s contribution was 39.

India’s bowlers were bruised, with Hardik Pandya conceding 51 from his four overs, the most expensive, and Yuzvendra Chahal with 1/35 the least costly. India dropped two catches, both straightforward chances put down by Dinesh Karthik at long-on to give Seifert a life on 71 and Taylor on 19, but the same fielder also held a terrific boundary catch to get the debutant Daryl Mitchell for 8. (WATCH: Dinesh Karthik drops sitter, redeems himself with stunner)

Munro hit two fours and two sixes in an opening stand of 86 in 8.2 overs, while Seifert slammed seven fours and six sixes with disdain, repeatedly exposing the stumps to shovel, swat and slog-sweep the pacers and spinners with power. His was a stunning innings from a player India may not have know much about.

This resulted in wickets to Chahal, Hardik and Bhuvneshwar, with only five bowlers used by Rohit. Kuggeleijn displayed his range by three fours and six in his seven-ball 20 not out.

Chasing 220, India struggled to forge partnerships. Shikhar Dhawan cashed in one some leg-side gifts from Kuggeleijn, flicking three consecutive balls for two sixes and a four. The first of those was an uppish whip that flew to deep midwicket where a leaping Lockie Ferguson failed to latch on. Moments later, Ferguson held a very fine diving catch at deep square leg when Rohit pulled Tim Southee.

Vijay Shankar was promoted to No 3 and struck Kuggeleijn for two fours and a six to send the rookie out of the attack with none for 34 in two overs, but at the other end Ferguson bowled a 151kph yorker that shattered Dhawan’s stumps. At the end of the Powerplay, India were 53/2.

From there, a collapse of four wickets for 13 runs snuffed out the match.

Shankar and Pant departed in the span of two balls from Santner – Pant was yorked for 4 and Shankar found long-off on 27 – and in the next over from Sodhi, Karthik and Hardik Pandya fell. Karthik slog-swept to deep midwicket where Southee held a sliding catch, Hardik looked to clear long-off and was pouched by Mitchell just inside the boundary.

Dhoni hung around to ensure India completed their overs and was ninth out for 39 off 31 balls, one more wicket claimed just inside the square boundary. That gave Southee excellent figures of 3/17 from four overs. 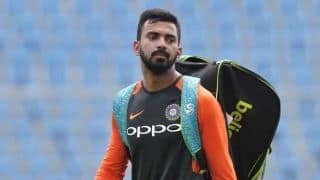 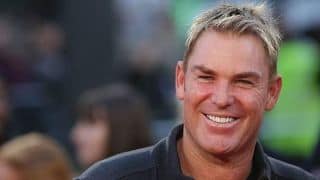