Chasing 93, the Blackcaps won in the 15th over with eight wickets remaining.

A fourth successive ODI loss at home was avoided thus avoided by New Zealand – who last suffered that fate in 2004 – as they completed a stunning consolation win over India in Hamilton on Thursday.

India were brutally exposed by the swinging ball in the fourth ODI at Seddon Park, where Trent Boult delivered a searing spell to rival the best seen in the country to help bowl out the visiting team for 92 in 30.5 overs. The Blackcaps completed their chase of 93 in 14.4 overs, meaning that the entire match lasted less than 50 overs.

In the most favourable conditions for swing bowling all series, India lost six wickets for 14 runs to be 40/7 in the 17th over, and a record low was only averted by Hardik Pandya, the innings’ second-highest scorer with 16, who became Boult’s fifth wicket in a rare unbroken ten-over spell. They made it as far as 92 in 30.5 overs – their seventh-lowest ODI total ever – which owed to a ninth-wicket stand of 25 between Kuldeep Yadav (25) and Yuzvendra Chahal (18*).

The absence of Virat Kohli, given a break from the tour, and MS Dhoni, still not 100% fit, told as India’s middle order subsided. (AS IT HAPPENED: 4th ODI)

Put into bat by Kane Williamson, India’s batsmen were subjected to a terrific new-ball spell of left-arm pace from Boult which was backed by some nagging medium-pace from the recalled Colin de Grandhomme who struck twice in his first over with just a fraction of away movement. (READ MORE: India’s lowest ODI totals)

Shubman Gill, the 19-year-old on debut, wore a bouncer to the helmet and struggled against Boult’s inswing all through his 21-ball stay, which produced nine runs before he became the quick’s third victim. A series of dot balls forced Gill to drive on the rise and pop back a catch to Boult. That wicket-maiden over gave Boult figures of 6-2-8-3, and a fourth came off the first ball of his next over when Kedar Jadhav was hit in line with the stumps. Once again, the accuracy and movement inwards off a full length did for the batsman, who was dumbfounded by the inswing. (READ MORE: How five-star Trent Boult jolted India in a flash)

Guptill began the chase by lofting Bhuvneshwar over cow corner for six first ball and then clipped consecutive fours, only to edge the fourth ball to Pandya at point. Williamson stood tall to force two exquisite boundaries into the offside before he tried to get too smart and steered Bhuvneshwar to Karthik on 11. Those two wickets put Bhuvneshwar on top of the wickets table for 2019 with 14.

Henry Nicholls – promoted to open with Colin Munro dropped – made 30 of 42 balls in a partnership worth 54 with Ross Taylor who scored hit three sixes in his 25-ball 37. 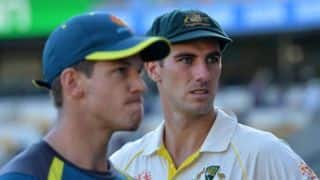 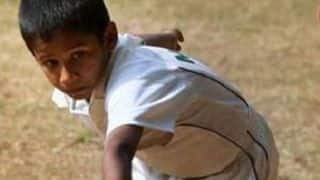