Kohli led from the front with a half-century as India chased down 150 with an over left.

Virat Kohli accompanied Quinton de Kock to lead from the front as India chased down South Africa‘s 150-run target to take a 1-0 lead in the first 2nd T20I in Mohali. Both captains scored half-centuries for their respective sides but Kohli trumped his South African counterpart to fashion a comfortable seven-wicket win – India’s first over South Africa in a T20 international at home.

Kohli walked out after India were off to a brisk start provided by Rohit Sharma and Shikhar Dhawan, who added 33 inside four overs. Rohit struck a couple of lovely sixes the Rohit pull but was out LBW to Andile Phehlukwayo before Kohli joined Dhawan and took India forward with a 61-run partnership.

Dhawan looked in exemplary touch himself, bringing out those lovely, crunching cover drives to cream three boundaries off his first five balls. With South Africa pacers put under pressure early by the India openers, Phehlukwayo, combined by the spin of Tabraiz Shamsi and Bjorn Fortuin slowed down the proceedings a little but India always managed to keep their noses ahead.

Kohli began with a crisp boundary each of Dwaine Pretorius and Phehlukwayo before South Africa lost a review on him. Kohli nailed Pretorius over long off before going quiet for the next eight overs. Kohli celebrated his fifty by smashing a boundary outside off and a beautifully-times six off Kagiso Rabada off a flick.

Dhawan slog swept Fortuin over sweeper cover before falling to one of the best catches ever seen in world cricket. Dhawan came down the wicket to the chinaman bowler and drilled him over his head. Nine out of ten times, it would have been a boundary but the one time it wasn’t when David Miller dived to his right and plucked a gem out of thin air.

Rishabh Pant endured yet another low score after sweeping Fortuin to Shamsi positioned inside the circle at fine leg, but in Shreyas Iyer, Kohli found an able ally, who hit a boundary down the ground to help India win with an over to spare.

After being put in to bat, de Kock was on fire but India pulled things back to overcome his dominating knock. He registered a third T20I fifty and in the company of Temba Bavuma, seemed to be leading South Africa towards a challenging total. But a terrific comeback staged by India after de Kock’s exit stopped South Africa inside 150 after they were cruising at one stage at 88 for 1.

South Africa got off the blocks with de Kock setting the tone. In his first match as South Africa captain, de Kock began scored a boundary off the first ball before taking three back-to-back off Navdeep Saini. His partner Reeza Hendricks however, fell to a loose shot skiing Deepak Chahar to Washington Sundar at mid-on.

New man in Bavuma took some time initially but once he hooked Hardik Pandya over deep square leg, there was no looking back. Runs began to come thick and fast with taking Pandya for back-to-back boundaries in his next. The 10th over cost India 14 runs as South Africa started reaping the benefits of a flourishing stand between Bavuma and his skipper, both taking 40 balls combined to bring up a half-century partnership.

De Kock reached his half-century off 35 balls thanks to some extravagant strokeplay and it took a special effort in the field from his counterpart Kohli to end the South Africa captain’s dominating knock. De Kock did not middle Saini as well as he’d have liked to and with the ball was seemingly clearing Kohli at mid-off, but a last-minute, full-stretched dive allowed the India skipper to hold on to a remarkable catch.

From there, South Africa’s scoring rate dipped. Rassie van der Dussen offered a return catch to Ravindra Jadeja shortly after and India began to pile the pressure with some sharp bowling. Sundar crippled the progress coming round the wicket and limiting Miller to singles. Even Bavuma could score just one more boundary since that expensive over from Pandya.

With South Africa primed for a late surge, India pegged them back with the wickets of Bavuma and Miller in quick succession. Trying to clear the fielder at long on, Bavuma found Jadeja and fell one short of a half-century, and in the next over, Miller missed a slog and was clean bowled by Pandya. India’s discipline could be gauged by the fact that they did not bowl a wide or a no ball through the innings.

Between overs 15 and 19, India conceded only 11 runs before a couple of sixes each by Phehlukwayo and Chris Morris lifted South Africa in the final over. 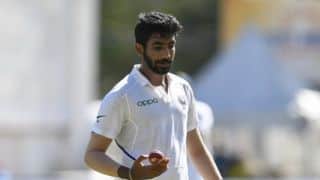