De Kock starred with a second straight half-century as South Africa chased down 135 with more than three overs left.

Quinton de Kock recorded back-to-back half-centuries to help South Africa complete a crushing nine-wicket win over India and level the series 1-1 at the Chinnaswamy stadium on Sunday. India were tied down to a modest 134/9 by some disciplined bowling from South Africa before their skipper dominated the chase and wiped off the target in 16.5 overs.

3rd T20I As it happened|Scorecard

In pursuit of a total way less than the average first-innings score of 180, South Africa were in hurry. De Kock drove the first ball of the innings through covers for a boundary off Washington Sundar, and although India manage to bowl four tight overs up front, the skipper hammered two identical sixes off Navdeep Saini to get South Africa going.

Reeza Hendricks was kept quiet initially before he took toll of the freebies by Deepak Chahar. Besides some wayward bowling, India were let down by some poor decision-making. A delivery from Chahar rapped Hendricks on the pads and was seemingly going way down leg perhaps hitting the seventh stump had there been one. But a baffling call to go upstairs wasted India s only review.

It was a DRS they could have benefitted from in the next over when Sundar had Hendricks on the backfoot, and the replays suggested the ball hitting off. South Africa motored along with de Kock and Hendricks needing 44 balls to raise the 50-run partnership. A crunching pull shot for a boundary from Hendricks looked like the beginning of an assault before India were finally provided the breakthrough by Hardik Pandya.

Virat Kohli pulled off a full-fledged dive forward to complete the catch but had to leave the field as a result of it. From there, de Kock took off. The Pandya brothers came in for some sever punishment with de Kock taking three fours and a six. Krunal returned figures even worse, going for 1/31 off three. de Kock was the aggressor in another fifty-plus stand off 30 balls, with partner Temba Bavuma, who creamed two boundaries before wrapped things up with a six.

Kagiso Rabada did most damage with 3/39, aided well by Bjorn Fortuin and Beuran Hendricks, replacing Anrich Nortje. South Africa began waywardly. Rabada, bowling the second, went for 17 runs, including back to back boundaries off the bat of Rohit Sharma, before the opener edged Hendricks off his first ball.

For a moment, it seemed like India had made up their minds to post 180 on board and judging by how Shikhar Dhawan was middling the ball, it looked very likely. India were cruising along, and Dhawan, who sent the first ball of the match a half tracker from Fortuin for a four led the charge.

Andile Phehlukwayo was taken for consecutive boundaries and Tabraiz Shamsi, who called himself the kind of bowler who spoils batsmen s party in T20Is, was welcomed with consecutive sixes. He tonked the wristspinner over long on and cleared the long-off fielder the ball after. However, Shamsi had the last laugh when Dhawan skied him for a catch to Bavuma.

At Dhawan s exit, it was as if India s momentum was stolen. Kohli faced 15 balls for nine before falling to Rabada and with two huge wickets gone, it was up to Rishabh Pant and Shreyas Iyer to take India forward. Pant began well, drilling a boundary through midwicket and then scooping Dwaine Pretorius to clear the rope. But South Africa were not going to allow this partnership to flourish. The bowlers mixed things up which slowed the scoring and India caved to the pressure.

Fortuin slowed it down and once again, a nothing shot led to Pant s dismissal for a 20-ball 19. Shreyas Iyer went down to the wicket and was out stumped, while Krunal Pandya feathered Hendricks. From 79/3 at the half-way mark, India were gasping for air at 98/6

Ravindra Jadeja and Hardik tried to break the shackles combining to thwack a boundary and six between themselves, but Rabada delivered a wonderful final over in which India lost three wickets. Jadeja was out caught and bowled, Sundar run out and Hardik caught in the deep. 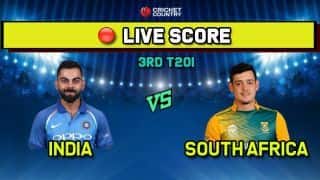