The all-round exploits of Krunal Pandya came to the fore as his two wickets and a handy unbeaten cameo helped India pocket the three T20I series with a 22-run DLS win over West Indies in the second T20I on Sunday. In the first innings, Krunal scored 20 off the final over to inject momentum as India, from 147/5, were taken to 167. In the second, he picked up two wickets in a span of four balls to send back two set batsmen to swing the match in India s favour.

Besides Krunal, rain played its part. Needing 168 to stay alive in the tournament, West Indies were 98/4, 22 runs behind the D/L par score of 120. After almost 45 minutes of loss of play, the game was called off.

That India set West Indies a challenging target of 168 was majorly due to Rohit Sharma s half-century. India began positively with Rohit Sharma continuing his sparkling form before Sheldon Cottrell and Oshane Thomas strangled the innings with four wickets between themselves. Overnight rains left a few concerning marks on the surface, but India s opening pair of Rohit and Dhawan were least bothered.

They got India off to a brisk start adding their 10th fifty-plus partnership in T20Is. After Rohit swivelled to pull the first ball of the innings for a boundary behind square, West Indies began waywardly. Cottrell bowled three wides in his opening over before Dhawan and Rohit helped themselves to easy boundaries.

West Indies wasted a review on Dhawan after a bouncer from Thomas was somehow convincing enough for them to go upstairs. However, no spike on the snicko meant that they lost their only review in the first over of the match itself. Sunil Narine had had quite a bit of success over Rohit, in T20s. In 146 balls, Rohit had managed to get just 158 runs while being dismissed eight times.

That wouldn t happen on Sunday, as Rohit swatted Narine over deep midwicket to become T20Is leading six-hitter. Rohit took on Keemo Paul cracking him for a six and a four to really trigger ominous sings for the West Indies. His partner Dhawan was a bit subtle, even though he did manage boundaries off Carlos Brathwaite and Narine. After the lower back half of Dhawan s bat broke, the batsman charged down to play an ugly hoick and was castled for West Indies first wicket.

Kohli and Rohit added 48 in six overs. Kohli joined Rohit and danced down the wicket to Narine for his first six before West Indies pulled things back through some tidy overs. Rohit, approaching his half-century switched gears and launched Brathwaite for a six and a four off three balls before copping a blow to his right elbow going for a swing.

India, who were placed at 98 for 1 in 12 overs, seemed to be racing past the average first innings score of 140 before Thomas strangled the innings. Having conceded 18 in his first two overs, Thomas struck a couple of telling blows to India. Rohit top edged Thomas for Shimron Hetmyer to safely take the catch at cover and Rishabh Pant blew another opportunity after he upper cut him to Kieron Pollard at deep third man.

Cottrell got the opportunity to bring out his salute celebration as Kohli missed his on-side whip. Between over 13 and 19, India managed just one boundary. Manish Pandey became Cottrell s second wicket and suddenly, West Indies looked like keeping India inside 150 before Pandya tucked into Paul. The first ball was a full toss on Pandya s pads and he dispatched it over deep midwicket. The next was full and Pandya hammered it over long-on. Paul lost his length again off the penultimate ball, but Pandya ensured he gave yet another full toss the treatment it deserved.

The experiment to Narine open the innings with Evin Lewis did not work well for the West Indies as India, through Bhuvneshwar Kumar and Washington Sundar had both West Indies opener back inside three overs. At 8/2, Nicholas Pooran and Rovman Powell came together and added 76 crucial runs for the second wicket. Even though the run-rate remained a bit of a concern, they ensured West Indies never fell too behind.

The introduction of Navdeep Saini and Khaleel Ahmed allowed Pooran and Powell to take advantage of the excessive pace. Result: Saini and Khaleel conceded 37 off their first four overs combined. Powell took five boundaries and a six off the two pacers, giving West Indies some much-needed lift after the two initial blows.

The first ball of Sundar s second spell was launched for a six by Powell before he mercilessly pulled Krunal over cow corner. The fifty was raised for Powell off 30 balls, but Pooran was stuck in his crease with Krunal and Sundar settling into a nice rhythm. Pooran faced a painstaking 34 balls for 19 runs with just one boundary. With India tightening things up, the pressure mounted and Pandya had Pooran out at long-on with Manish Pandey hanging on to a smart catch.

The death knell for West Indies arrived three balls later when Pandya removed the set Powell LBW. Pollard and Hetmyer added 13 off 10 before lightning forced players off the field, which later turned into relentless rain. 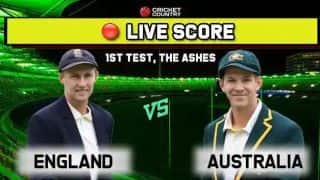