By the end of play on Day 2, India were powered by Rishabh Pant and Ajinkya Rahane, both of whom had struck half-centuries to take the total to 308 for 4.

West Indies had shown a glimmer of hope between lunch and tea on the second day of the second Test against India in Hyderabad, when they picked up three crucial wickets, that of Prithvi Shaw, Cheteshwar Pujara and Virat Kohli. From 80 for 1, India were reduced to 162 for four. But thereafter, a familiar tale unfolded, one where the Indian batsmen made merry at home. By the end of play on Day 2, India were powered by Rishabh Pant and Ajinkya Rahane, both striking half-centuries to take the total to 308 for 4, behind West Indies’ first-innings total by three runs.

India had taken approximately 30 minutes and seven-and-a-half-overs to wrap up the West Indies innings for 311, with Umesh Yadav registering career-best figures of 6 for 88. He picked up all three wickets to fall but not before Roston Chase had scored his fourth Test century, the first away from home and second against India. The visitors would have fancied a total anywhere near 350 but once Umesh removed overnight batsman Devendra Bishoo fourth ball of the day, those hopes started flickering.

Umesh got plenty of movement off the surface, a pivotal factor that troubled the well-set Chase. One such delivery came in and breached the batsman s defence to rock the stumps, bringing up Umesh s second five-wicket haul in Tests. Next ball, he found the outside edge of Gabriel to become the first Indian pacer after Javagal Srinath to take six wickets in an innings at home.

Chase s hardwork of the second session was undone by Rahane and Pant, who batted through the final session to add 146 unbeaten runs for India s fifth wicket. India played out a wicketless final session to taking away the honours of yet another session. Both batmen brought up their half-centuries off consecutive deliveries and put India ahead moments before the final ball of the day was bowled.

Pant played a near perfect innings. In fact, it was he who got India a push in the final session after Kohli and Rahane were tired down by the Windies spinners. There was a small lapse in concentration when Pant, on 24, smacked Shannon Gabriel, but the chance was spilled by substitute wicketkeeper Jahmar Hamilton, who took over the keeping duties after Shane Dowrich received a blow on the knee and had to be replaced. Barring that, Pant batted the way only he knows, going after the bowling. Rahane, who was struggling at 19 off 78 at the break, also got a move on once the seamers were introduced. A drive past Gabriel got him his third boundary and as he spent more time, the going became easy. By the end of time, Rahane was showing signs of himself from 2016, one of his most impressive years at home.

At the top, Shaw brought up his second consecutive 50-plus score and provided India a brisk start. The 18-year-old took Jason Holder and Gabriel for 37 off the first six overs and carted Warrican s left-arm spin for three boundaries in the eighth over, the first of which brought up the fifty for India. Following up in his maiden century in Rajkot, Shaw displayed the same flambouyance as he did at Rajkot. Resuming his innings in the second session, Shaw scored a couple more boundaries before falling to Warrican.

At the other end, KL Rahul, who got off the mark with three off the first ball of the innings, struggled for the next 24 balls before chopping a delivery from Holder onto his stumps. But India were carried forward by Shaw and Pujara, who saw them through to lunch. But Windies fought back admirably in the second session with Holder, Gabriel and Warrican picking up three crucial wickets.

Having removed Shaw and Pujara early into the second session, India looked up to Rahane and Kohli to rebuild the innings. They began positively after Pujara had poked at a delivery from Gabriel and was out caught behind. West Indies, however, were always a step ahead of their opponents. With the ball turning and the occasional puff of dust noticeable, Warrican and Bishoo settled in nicely to stop the run flow.

Its effectiveness could be gauged by the fact that India scored six runs in 47 deliveries. Having gone 11 overs without a boundary, Kohli broke the shackles with a whip past Bishoo, before cutting him again off his next over. Kohli was eventually declared out leg before wicket by his counterpart Holder a review not able to save him to snap a promising 60-run stand, before the Rahane-Pant show took over. 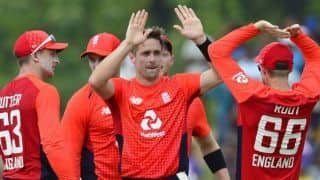