Chasing 112, England Women won by five wickets in the final over in Guwahati.

An economical three-wicket haul from the experienced seam bowler Katherine Brunt was backed by a superb unbeaten 64 from Danielle Wyatt as England Women beat India Women by five wickets in the second T20I in Guwahati to seal the series 2-0.

India made a fist of defending a small total, but Wyatt’s wicket proved elusive as England chased a target of 112 with five balls to spare.

Brunt finished with 3/17 from her four overs, an excellent effort that helped keep India to 111/8, and Wyatt continued her form to steer the chase.

Having opted to field, England did very well to allow just four fours and two sixes across India’s 20 overs, in which five players managed double-digit scores but the highest was 20 from Mithali Raj. Those two sixes came from India’s captain Smriti Mandhana, who hit 12 off five balls before she was the first wicket to fall in the third over, caught behind by Brunt with India’s score 24.

Brunt added Jemimah Rodrigues, bowled for just 2, in her third over and later got Bharati Fulmali for 18 in the 20th over.

Wyatt was forced to drive England’s chase, and did so exceptionally to negate the threat of India’s spinners. Radha Yadav bowled Tammy Beaumont for 8 in the fifth over and Poonam Yadav struck second ball to hold a return catch from Amy Jones. Then Ekta Bisht trapped Natalie Sciver (1) and England skipper Heather Knight (2) lbw in in successive overs to leave the chase in trouble at 56/4.

Wyatt moved to her fifty and with Lauren Winfield (29) put on 47 to take England to within nine runs of victory before Winfield fell to Deepti Sharma. Wyatt carrier her bat for 64 off 55 balls, hitting six fours including the winning hit past short fine leg to the boundary. 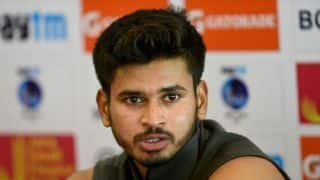 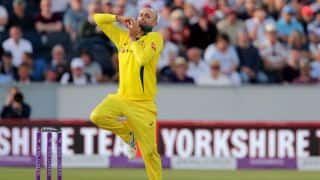