Suzie Bates scored 62 off 52 balls setting up a four-wicket win for New Zealand women against India women in the second T20I at Eden Park, Auckland on Friday, thus helping her team seal the three-match series 2-0 with one more match to go.

While Bates set the White Ferns on course for victory early on in chase of 136, but the middle-order made heavy work of the target as Indian bowlers made a good comeback in the death overs.

Cruising at 101/2 in 14.3 overs, needing 35 runs in just 33 balls, NZ lost skipper Amy Satterthwaite for 23 to Poonam Yadav triggering a mini collapse. Bates was removed by Arundhati Reddy in the 18th over followed by the wicket of Anna Peterson in the same over.

Two runs came in that over followed by a five-run 19th over by Deepti Sharma setting NZ nine of the last six balls. However, wicketkeeper batter Katey Martin got a boundary off the first ball of the final over bowled by Mansi Joshi before being knocked over the very next ball. Leigh Kasperek and Hannah Rowe then got the remaining runs to see their team home.

Earlier, Jemimah Rodrigues scored 72 off 53 balls to help India women post 135/6. After being out in to bat, India lost opener Priya Punia early for a ten-ball four to Sophie Devine but in-form Smriti Mandhana and Rodrigues put on 63 runs for the second wicket to steady the Indian innings. However, the fall of Mandhana to Rosemary Mair in the 10 over halted the Indian momentum and as was the case in the first T20I, the middle-orde failed to build on the good start by the top order.

Skipper Harmanpreet Kaur drove on off Leigh Kasperek to rival skipper Amy Satterthwaite at short extra cover to depart for five. Dayalan Hemalatha retired hurt for two after injuring her shoulder when attempting a dive, followed by the wicket of Deepti Sharma (run out) for six.

But Rodrigues kept her end intact and took on legspinner Amelia Kerr, hitting her for three straight boundaries. Rodrigues though departed in the 19th over to Kerr after hitting six fours and one six. India when on to lose on more wicket in the final over in the form of Arundhati Reddy for 3 to Mair.

Veteran Mithali Raj was once again not picked for the 2nd T20I despite Indian batting unit collapsing in the 1st T20I. 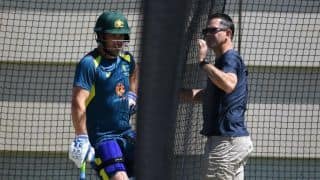