After being put in to the bat, Bangalore succumbed to the league s jointest-sixth lowest total and their joint-lowest as Chennai s Harbhajan Singh and Imran Tahir shared six wickets between them

The season opener of the 12th edition of the Indian T20 League turned out to be a damp squib as Chennai spinners unraveled Bangalore s batting line-up at the MA Chidambaram Stadium, Chennai on Saturday, cantering home to seven-wicket win, chasing a paltry 71 for victory, thus registering their seventh consecutive win over Bangalore.

After being put in to the bat, Bangalore succumbed to the league s joint-sixth lowest total and their joint-second lowest as Chennai s Harbhajan Singh and Imran Tahir shared six wickets between them giving away just 29 runs in eight overs.

Chennai did stutter early on a slow Chepauk turner, losing opener Shane Watson for a 10-ball duck to Yuzvendra Chahal and Suresh Raina for 19 to Moeen Ali. However, during his knock Raina became the first player to score 5000 runs in the league and consolidated his position as the league s all-time leading run-getter. Chennai s innings was anchored by Ambati Rayudu (28) and then by Kedar Jadhav (13*).

India and Bangalore skipper Virat Kohli had a chance to become the first player to the 5K milestone, but he managed just six runs taking his tally to 4954 runs. He was the first to go caught at deep midwicket by Ravindra Jadeja in the fourth over of the match. Deepak Chahar had started well conceding just eight runs off his first two overs, while Harbhajan gave away just two in his first. Hence, the shot of desperation by the Indian skipper.

Harbhajan (3/20), who had played only three T20 games in 2019 all for his state side, Punjab, in the 2019 Syed Mushtaq Ali Trophy and went wicketless, was in top form claiming the next two wickets to fall as well.

Ali, at No.3, had opened his account with a swat for a six off Harbhajan, but popped one back to the bowler in his next over to depart for nine. AB de Villiers was undone by the slowness of the pitch, and went through his shot way too early as the top edge went to the midwicket and was caught by Jadeja. This after Tahir had dropped de Villiers a ball earlier while attempting the same shot. In the same over , Debutant Shimron Hetmyer was run-out by Raina for a two-ball duck.

The inexperienced middle-order of Bangalore were no match to Chennai spinners as Tahir got in to the act to remove another debutant in Shivam Dube, who guided one straight to the hands of Watson at first slip. An over later, Colin de Grandhomme got a faint edge off Jadeja to which Dhoni obliged as Bangalore slumped to 50/6.

Bangalore s third debutant Navdeep Saini was caught by Watson off Tahir after Chennai had taken the review on a leg before decision, but the replays showed the Delhi bowler had nicked the ball.

Parthiv Patel, at the other, was a mute spectator to the proceedings even as Tahir claimed his third when a Chahal slog sweep ended in the hands of Harbhajan at midwicket. Jadeja knocked over Umesh Yadav for one, while Dwayne Bravo had Parthiv caught at square leg off his first delivery of the match. He went for 29.

For Bangalore, the only plus was the performance of young Saini who hurried Watson and Raina with pace and as commentator Simon Doull would describe bowled with genuine heat , clocking 145 kmph regularly. He send down four overs for just 24 runs while Chahal returned impressive figures of 4-1-6-1. Mohammed Siraj knocked over Rayudu for 28, but Jadhav finished off the match with 14 balls remaining. 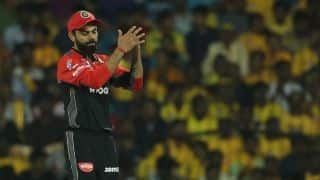