Bravo made the most of a typical sluggish Feroz Shah Kotla track, helping his team restrict Delhi to 147/6 in match five, returning figures of 3/33.

Chennai allrounder Dwayne Bravo made the most of a typical sluggish Feroz Shah Kotla track, helping his team restrict Delhi to 147/6 in match five of the Indian T20 league, returning figures off 3/33 on Tuesday. (FOLLOW: Delhi Vs Chennai Cricket Score)

Bravo, who came in to bowl the 14th over was taken for 17 runs, but the experienced campaigner came back strongly with a double-wicket over in his second – including the scalp of in-form Rishabh Pant and Colin Ingram – before sending back half-centurion Shikhar Dhawan in his third. Delhi lost way in the death overs, managing just 29 runs in the final five overs and losing four wickets.

Earlier, opting to bat first, Opener Prithvi Shaw gave Delhi a positive start with three consecutive fours off Shardul Thakur in the second over, and by the powerplay overs the home team were at a healthy 43/1. Shaw though departed to Deepak Chahar, caught at deep mid wicket by Shane Watson off a short pitch delivery. He made 24 off 16 balls.

and once spinners started operating from both ends with Ravindra Jadeja, Harbhajan Singh and Imran Tahir being employed, Delhi s run-rate dipped and the slowness of the Kotla track meant they meandered to 65 in ten overs, scoring 22 runs from overs six to ten.

Dhawan, on his home track, battled hard and kept the scorecard ticking. Skipper Shreyas Iyer took on Tahir with a six, but the South African had the last laugh, trapping the Delhi skipper with a slider for 18 off 20 balls.

Pant started well with a four off Jadeja, while Dhawan failed to find the gaps but just about managed to keep his strike-rate at near about 100. With the introduction of pace in the form of Bravo, Dhawan got two consecutive boundaries as the team s hundred came up in the 14 over.

Pant was kept quite early on with spin, but he broke the shackles with a six off Harbhajan – the last ball of his spell (4-0-30-0), but the West Indian struck gold removing the wicketkeeper batsman – attempting a flick – caught by Thakur at deep backward square for 25 (13 balls) in the 16th over, and followed it up with the wicket of Colin Ingram for just two, caught at short extra cover by Suresh Raina.

With the firepower gone, Delhi struggled in the death overs, even as Dhawan got to his 33nd Indian T20 League fifty off 45 balls. Jadeja cleaned up West Indian Keemo Paul with a quicker one for a duck while Dhawan (51 off 47) handed Bravo his third success of the night skying one in front of square. Axar Patel (9*) and Rahul Tewatia (11*) then chanced their arms around to push Delhi.

For Chennai, Chahar proved to be the most economical giving away just 20 runs in his four overs to go with his one wicket, while Jadeja and Tahir also added one wicket apiece. 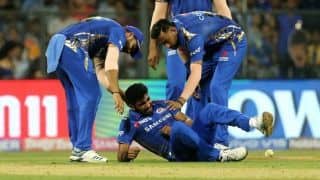