One team finally got off the mark on the leaderboard, and while heading into this encounter, both sides were in search of their first win, in the end, it was deservedly Rajasthan Royals, the better of the two teams, who are finally up and running in 2019 Indian Premier League with a seven-wicket win over Royal Challengers Bangalore. (READ: Match Highlights)

After a disciplined bowling effort from Shreyas Gopal had kept RCB to 159 for 8, Jos Buttler‘s fireworks, aided by some sloppy efforts from Virat Kohli and his men, ensured Royals’ first win. RCB dropped three catches; two-and-a-half to be fair, with Kohli himself being guilty of dropping an easy chance. Yet, RCB managed to push the game into the final over, but the let-ups caught up and the Royals sealed the game with one ball to spare. That’s four losses in four games now for RCB. (READ: Kohli third to captain 100 games in IPL)

Slip ups aside, Buttler set the perfect platform for the chase. He was quick to get off the blocks with a boundary in the first over. One of RCB’s biggest letdown this season has been their fielding and it came to haunt them in the second over itself. Navdeep Saini bent his back, lured Ajinkya Rahane to slash at the ball and induce an edge, only to be spilled by his captain Kohli at first slip. Next two deliveries, Buttler cracked back-to-back boundaries and declared his intent.

Buttler then took Saini on. The Delhi pacer cranked up speed in excess of 140 throughout his second over but missed his line. Buttler’s sharp eyes were quick to spot the error and helped himself to a flurry of boundaries. He drilled Moeen Ali down the wicket to bring up his half-century off 38 balls, his fifth in a row at the Sawai Mansingh Stadium and followed it with a maximum.

RCB missed a trick in holding back Yuzvendra Chahal till the seventh over. The move seemed even more baffling considering how Kohli witnessed first-hand the damage Gopal did to his batsmen by returning figures of 3 for 12. By the time Chahal was introduced, Royals had already raced to 59 without loss. Rahane, who started off slowly, but grabbed momentum with consecutive boundaries off Umesh, was the first Royals wicket to go down, out LBW to Chahal. Steve Smith then joined Buttler to form a rapid alliance of 44 off 28 balls. RCB were under the pump.

Buttler looked in groove similar to the one he was in during Royals’ opening fixture against King XI Punjab. Only this time he was dismissed fair and square, without controversy, by Chahal, who snapped the stand having Buttler miscue a full delivery to Marcus Stoinis at long-off. Rajasthan were comfortable placed when Buttler was dismissed, but Smith and Rahul Tripathi chose not to leave it till late and switched gears.

RCB were slightly better with that bat, even though they could have scored more considering Parthiv Patel‘s rampant fifty. Reverting to their opening combination of Kohli and Parthiv from the first game, the pair batted sensibly inside the Powerplay. Kohli showed intent from the very first over, collecting his first boundary off Krishnappa Gowtham. But ever since, the skipper struggled to find his timing, managing a streaky four off an edge and one-handed aerial flick towards midwicket. Captaining his 100th game, Kohli was foxed by Gopal’s wrong one, a ball after Kohli survived a close leg before shout.

Gopal then tightened the screws adding another big, AB de Villiers, again, with a googly. A flighted delivery, flummoxing de Villiers to offer a return catch. Kohli and de Villiers pretty high-profile wickets to get. And if that wasn’t enough, Gopal added a third dismissal of a wrong one which saw Shimron Hetmyer poking outside off and offering a feather to Buttler.

Maintaining the tempo was Parthiv, who set the tone in Jofra Archer’s first over, smacking three boundaries off the England allrounder all contrasting shots: a flick, an upper cut and a straight drive. Seeing three wickets fall at the other end, Parthiv decided to target Varun Aaron and took the pacer for two boundaries in an over that leaked 16 run.

Later, it was Ben Stokes’ turn to face the heat as he was pulled for a six and cut for a boundary. His assault caught Royals off-guard, to the extent that Archer overstepped, a delivery off which Parthiv brought up his half-century (29 balls). Stoinis, making his debut for RCB, made the most of a free-hit next ball. Parthiv took one more boundary and completed 4000 T20 runs before perishing in the deep in a bid to accelerate.

A six from Moeen off Archer first ball of the 20th gave RCB a lift. The England allrounder followed it with a boundary and Stoinis ended the innings with a flourish with yet another four as RCB collected 17 in the final over. 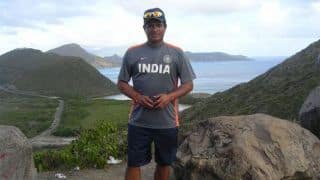 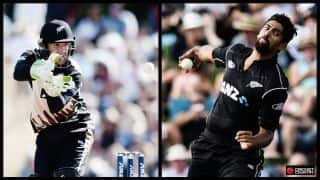