Punjab sprung a surprise by dropping Chris Gayle and opened with Sam Curran after being put in to bat by Delhi in Match 13 of the Indian T20 League at the PCA IS Bindra Stadium, Mohali, Chandigarh on Monday; and while Curran, opening for the first time in his career, made 20 off 10 hitting three terrific boundaries off Avesh Khan, Punjab lost way in the middle overs and eventually stuttered to a below par 166/9, with Chris Morris returning 3/30 for Delhi. While, leg spinner spinner Sandeep Lamichhane was the stand out bowler, picking up 2/27 in his four overs.

Gayle was left out owing to niggle, and big things were expected from KL Rahul, but the opener was undone by a full one from Morris and departed LBW for just 15 off 11 balls in the second over. Curran s quick runs meant that by the time he departed – after hitting Lamichhane for a straight six – trapped in front, Punjab were 36/2 in 3.5 overs.

But the wicket of Mayank Agarwal, when he backed up too far to a Sarfraz Khan shot that went straight to Shikhar Dhawan at extra cover who hit bulls-eye at the non-striker s end, for six dented Punjab.

Despite Morris and Avesh going for plenty, Lamichhane ensured a tight lid was kept on the scoring rate. With Miller in as early as the eight over, Punjab were in rebuilding phase. Sarfaraz played some enterprising shots en route to a 29-ball 39 and combined with Miller for 62 runs for the fourth wicket.

However, a visibly tired Sarfraz handed Lamichhane his second wicket, caught behind in the 14th over. Miller (43 off 30), at the other, looked good for a final flourish taking two sixes – one each of Lamichhane and Harshal Patel, but got out at the wrong time to country mate Morris, when he top-edge an off-cutter, caught by Rishabh Pant. 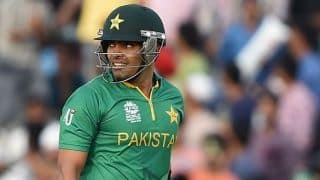