For the second time in a row Delhi made hash of what was a winning position, failing to make 23 runs off 21 balls, losing seven wickets for just eight runs in 17 balls against Punjab

For the second time in a row Delhi made hash of what was a winning position, failing to make 23 runs off 21 balls, losing seven wickets for just eight runs in 17 balls against Punjab in Match 13 of the Indian T20 League at the PCA IS Bindra Stadium, Chandigarh, Mohali. (Highlights: Punjab vs Delhi)

While against Kolkata, Delhi managed a tie and eventually relied on Kagiso Rabada to win the Super Over, on Monday Punjab closed out the game with some terrific death bowling to claim their third win. Delhi, shockingly, succumbed to their second loss.

Sam Curran, coming in place of an injured Chris Gayle, sent down a terrific 18th over that saw the backs of well-set Colin Ingram and Harshal Patel before Mohammed Shami virtually sealed the game with a four-run 19th over, that had two wickets as well. And Curran finished it with a hat-trick in the final over.

Delhi seemed to be on course for an easy win with four overs to go as Ingram was on 36 off 24 while Rishabh Pant was batting on 33 off 24. But, with Pant cleaned up by Shami in the 17th over, the floodgates opened as Delhi went from 144/3 to 152 all out, losing the match by 14 runs.

Curran, after conceding nine runs off his first over, claimed four wickets and gave away just two runs in his eight balls – claiming Patel, Kagiso Rabada and Sandeep Lamichhane off three consecutive deliveries, and Shami finished well with 2/27 in his four, while Ashwin made a telling impact with 2/31 and a crucial run-out.

After a decent start Delhi stuttered, falling prey to Punjab s three-pronged spin attack consisting Ashwin, Murugan Ashwin and Mujeeb ur Rahman in the middle overs before Ingram anchored the chase until the 16th over. Pant was slow to start, but contributed with a vital 39 off 26 balls.

After Chris Morris 3/30 and Lamichhane s 2/27 had limited Punjab to a below par total, Ashwin started the defence in style claiming Prithvi Shaw off the first ball of the innings. Delhi skipper Shreyas Iyer and Shikhar Dhawan then combined for a stand of 61 runs in 7.1 overs. Iyer was looking in good touch hitting five fours, but fell to South African Hardus Viljoen in the 8th over for 28 off 22 balls. An over later, immediately after the strategic break, Ashwin got the key wicket of Dhawan for 30 off 25 balls with a carrom ball that skidded off the turf, trapping the Indian opener in front.

With Ingram and Pant new to the crease, Punjab started to dominate with their spin trio, but shoddy fielding let the home team down. Ingram played the situation well to guide the young Pant who hit three fours and two sixes before falling in Shami s second spell. Off the next ball skipper Ashwin hit the bulls-eye to run out the hard-hitting Morris, to put his team back in the game and Delhi s lower-order imploded after that.

Earlier, Punjab sprung a surprise by dropping Gayle and opened with Curran after being put in to bat, and while Curran, opening for the first time in his career, made 20 off 10 hitting three terrific boundaries off Avesh Khan, Punjab lost way in the middle overs.

Gayle was left out owing to niggle, and big things were expected from KL Rahul, but the opener was undone by a full one from Morris and departed LBW for just 15 off 11 balls in the second over. Curran s quick runs meant that by the time he departed – after hitting Lamichhane for a straight six – trapped in front, Punjab were 36/2 in 3.5 overs.

But the wicket of Mayank Agarwal, when he backed up too far to a Sarfraz Khan shot that went straight to Dhawan at extra cover who hit bulls-eye at the non-striker s end, for six dented Punjab.

Despite Morris and Avesh going for plenty, Lamichhane ensured a tight lid was kept on the scoring rate. With Miller in as early as the eight over, Punjab were in rebuilding phase. Sarfaraz played some enterprising shots en route to a 29-ball 39 and combined with Miller for 62 runs for the fourth wicket.

However, a visibly tired Sarfraz handed Lamichhane his second wicket, caught behind in the 14th over. Miller, at the other, looked good for a final flourish taking two sixes – one each of Lamichhane and Harshal Patel, but got out at the wrong time to countrymate Morris, when he top-edge an off-cutter, caught by Pant. 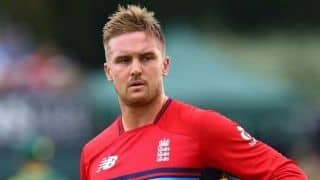 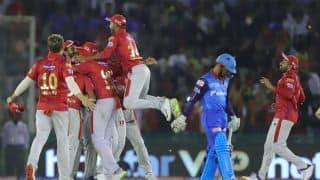