Hardik Pandya came to the fore for the hosts, after they stuttered in the middle, with a unbeaten 37 off just 16 balls to help Mumbai claim their fifth win and jump to third spot in the points tally.

Royal Challengers Bangalore succumbed to their seventh loss in nine games in IPL 2019 in Match 31 against Mumbai Indians at the Wankhede Stadium, Mumbai on Monday, failing to defend a total of 171.

Hardik Pandya came to the fore for the hosts, after they stuttered in the middle, with a unbeaten 37 off just 16 balls to help Mumbai claim their fifth win and jump to third spot in the points tally.

After a flying start, that saw Mumbai race to 70 in seven overs, it looked like Quinton de Kock and Rohit Sharma will take Mumbai home, but the introduction of Moeen Ali in the seventh over proved the game-changer as he removed Rohit with a delivery that turned square to from outside off to middle. Two balls later, Ali managed to spin one around the wicket into the left-handed de Kock, trapping in front for 40 off 26 balls.

Both de Kock and Rohit had earlier dug in to RCB pacers, who bowled too short and without much direction and were duly punished. Umesh Yadav was hit for two consecutive fours by de Kock in the first over and then was taken for two fours and a six in his second over. Rohit hit Mohammed Siraj for a four and a six in his first over, while Navdeep Saini s second over went for 13 runs.

In no time, MI had raced to 67 in six over, before Ali broke the stand.

Tidy spells from Yuzvendra Chahal and Ali in the middle-overs then brought RCB back in to the game. Ali s four went for just 18 runs while Chahal added the wickets of Suryakumar Yadav and Ishan Kishan, giving away 27 runs in his fours overs.

Kishan was looking good striking the ball at 230.33, with 21 off just nine balls, but was stumped trying for an over ambitious swipe off chahal, after hitting the leg spinner for a six the previous balls.

With 41 off 24 balls, RCB had a chance, but with Hardik and Kieron Pollard in the middle, it was Mumbai s game to win and and they did with Hardik tonking Pawan Negi – Virat Kohli s left-arm spin gamble against two right-handers – for two fours and two sixes to close out the game.

Earlier, Ali and AB de Villiers combined for a stand off 95 runs for the third wicket off just 61 balls to help RCB set base for what should have been a grand flourish in the death overs, but lost way to get restricted for 171/7.

After being put in to bat, Bangalore found themselves in a spot of bother when the tall and strapping Jason Behrendorff had Virat Kohli edge one to wicket-keeper de Kock in the 3rd over, but a smart 37 runs stand between Parthiv Patel and de Villiers steadied Bangalore and then they rode on Ali s 50 off 32 balls and de Villiers 75 off 51 balls. But, Mumbai made comeback in the last five overs, with Lasith Malinga claiming four wickets in his last two overs.

Behrendorff, despite taking the key wicket of Kohli, had a day to forget, giving away 49 runs in four overs. After Kohli was undone by a back of length delivery that jagged back in and took the inside edge, the Australian quick lost his focus and was clobbered for three fours and a six by Patel in the fifth over.

That over helped RCB s run-rate to touch eight runs per over, but they were kept under check by Hardik and Rahul Chahar. By the tenth RCB s run-rate dipped to seven, with the loss of Patel to Pandya for 28 off 20 balls.

But, de Villiers looked in ominous touch early on and rode on his luck to stay in the middle. Ali started off with a sublime flick off Chahar for a six and then proceeded to add two more maximums for his second fifty of the IPL. He took on Behrendorff in his fourth over, taking him for a four and two sixes.

De Villiers notched up his 32nd IPL fifty off 40 balls in the 17th over, but lost Ali to a Malinga slower one, caught by Hardik at deep midwicket and then the Sri Lankan accounted for Marcus Stoinis (0) with yet another slower one.

Jasprit Bumrah s final over, the 19th over, weas taken for two fours by de Villiers, but Malinga s final over saw the back of the well-set South African, courtesy a direct hit from Kieron Pollard, and two more wickets in the form of Akshdeep Nath (2) and Negi (0). 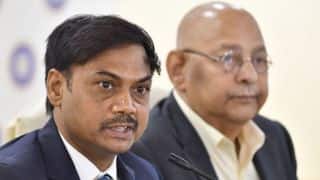