Delhi s new recruits – a returning Shikhar Dhawan and T20 freelancer Colin Ingram – got together for a stand of 73 runs in 9.2 overs for the third wicket to revive their team from early blows, before retained player Rishant Pant s powerful cameo of 78* off just 27 balls took Delhi to a formidable total of 213/6 against Mumbai in their opening fixture of the 2019 edition of the Indian T20 League at the Wankhede on Sunday.

After they were reeling at 29/2 in 3.4 overs, Delhi were buoyed by Ingram and Dhawan’s calculated stand as the duo rotated the strike well and pounced on every chance to hit a boundary. Ingram was the aggressor of the two hitting Hardik Pandya for a four and six, before drilling Krunal Pandya for three fours in an over. Dhawan got in to the act with a six and four of one McLenaghan over.

This after Delhi lost opener Prithvi Shaw for seven – caught behind by Quinton de Kock off Mitchell McClenaghan – before skipper Shreyas Iyer fell prey to a stunning piece of fielding by Kieron Pollard at extra-over for 16, after being put in to bat.

But, Delhi were pegged back again with the wickets of Ingram (47 off 42) and Dhawan (43 off 36) in the space of two overs, with Ben Cutting getting rid of Ingram – caught at mid wicket – while Dhawan perished to Hardik s off-cutter.

Pant had a scare early on when he nearly popped one off Hardik to mid-on, but he got going with two fours off Cutting – one of which was an audacious flick to fine leg. He lost Keemo Paul and Axar Patel at the other end, but the 22-year-old continued to play the risky shots getting maximum out of it en route to a 17-ball fifty.

He took 16 runs off Hardik’s final over – the 18th of the match – with two sixes and a four, before flicking Jasprit Bumrah for a six over square leg and a four – swatting one close to his hips for a four in the same region.

Pant then dug in to 17-year-old debutant Rasiksh Salam Dar, taking two sixes and a four off the 19th over to spoil his figures. Dar s first three overs went for just 21 runs, but his last doubled the runs. Delhi closed out the innings strongly with Pant and Rahul Tewatia dispatching Bumrah for one six each. Bumrah picked up an injury off the last ball of Delhi’s innings much to the worry of Mumbai and India fans. 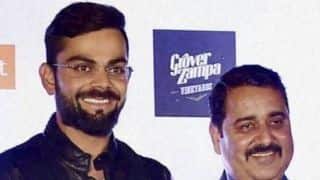