Mumbai managed to post a formidable 187/8 against Bangalore in Match 7 of the Indian T20 League at the M Chinnaswamy Stadium, Bangalore on Thursday, despite leg spinner Yuzvendra Chahal s 4/38

In what was described as an absolute belter of a track by the experts of the official broadcaster, Mumbai managed to post a formidable 187/8 against Bangalore in Match 7 of the Indian T20 League at the M Chinnaswamy Stadium, Bangalore on Thursday, despite leg spinner Yuzvendra Chahal s 4/38. (FOLLOW: Bangalore Vs Mumbai – Match 7)

The fact that none of the Mumbai batsmen managed to go past the 50-run mark, essentially not able to convert their starts dented the Rohit Sharma-led side, but Hardik Pandya‘s 14-ball unbeaten 32-run knock boosted Mumbai. The captain top-scored with 48, while Suryakumar Yadav made 38. In the last five overs, Mumbai conjured 48 runs, losing five wickets.

After winning the toss, Mumbai were off to a good start with Rohit and Quinton de Kock combining for 54 runs in just 6.3 overs. De Kock was the first to go, cleaned up by Chahal – while attempting a reverse sweep – for 23 off 20 balls.

Suryakumar, who was run-out in the first game for just two against Delhi, drove Mumbai in the middle overs, but got out at the wrong time skying one towards cover off a tossed up delivery from Chahal in his third over. The Haryana bowler wrapped up a memorable performance with another tossed up delivery to Kieron Pollard (5) – caught at deep extra cover by Shimron Hetmyer.

Mumbai imploded after that losing Krunal Pandya – to another good catch in the deep by Saini – off the bowling of Umesh while Mitchell McClenaghan played one on to hand Siraj his first wicket. Hardik then tonked three sixes in the last two overs push Mumbai s total. 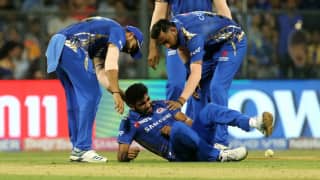