Andre Russell came to Kolkata Knight Riders rescue yet again as the big Jamaican powered his away to a match-winning cameo off unbeaten 48 off 13 balls, taking his team to their third victory

Andre Russell came to Kolkata Knight Riders rescue yet again as the big Jamaican powered his way to a match-winning cameo off unbeaten 48 off 13 balls, taking his team to their third victory with a successful chase of 206 against Royal Challengers Bangalore at the M Chinnaswamy Stadium, Bangalore in Match 17 of IPL 2019 on Friday. (HIGHLIGHTS, RCB vs KKR)

Russell found himself in the middle with four overs to go and 66 runs needed and despite swinging and missing off his first four deliveries, he found his range when he hit a second Mohammed Siraj beamer for a six. Siraj was taken out of the attack and Marcus Stoinis, who finished the over – the 18th of the match – was taken for two big sixes. 23 runs came off it. (ALSO READ: Virat Kohli second Indian to 8000 T20 runs)

Kohli handed the 19th over to the experienced Tim Southee, but Russell took apart the New Zealand international four sixes and a four in the over to seal the deal, taking Kolkata to a five-wicket win with five balls remaining. Russell finished with a strike-rate of 369.93, hitting seven sixes and a four. (ALSO READ: Virat Kohli surpasses Suresh Raina to become IPL s highest-ever run-getter)

While Kohli and de Villiers lit up the stadium earlier in the night, it took the left-arm spin of Pawan Negi and leg spin Yuzvendra Chahal, for RCB curtail Kolkata.

Negi, playing his first match of the season, came on to bowl in the 10th over, with KKR comfortably placed at 92/1 in chase of 206, and returned with the wickets of Robin Uthappa and Chris Lynn and finished with figures of 4-0-23-2, while Chahal put in a spell of 4-0-25-1 to derail Kolkata. From overs nine to 16, Kolkata managed 48 runs, losing three wickets.

But, Kolkata were in the hunt courtesy in-form Nitish Rana s 23-ball 37, before he fell to Chahal. This after they were off to a flying start with Lynn hammering 43 off 31 balls and Uthappa making 33 off 25 balls.

While Kohli and de Villiers had ransacked 108 runs off just 55 balls putting the Kolkata pacers to the sword, RCB pacers were also taken to the cleaners with Southee going for 32 runs in his three overs and 29 in his last over. Siraj went for 36 from his 2.2 overs.

Amid the ruins, Navdeep Saini continued to impress, returning figures of 4-0-34-2.

After losing Sunil Narine early for ten to Saini – taken magnificently behind square by Negi, Lynn and Uthappa added 66 runs in just eight overs. While Lynn swung his bat around missing more than he hit, Uthappa was at his elegant best taking six fours, before he was holed out at long-off in Nego s first over.

With Negi bowling in tandem with Chahal, Kolkata failed to get a boundary in 22 balls and the frustration led to Lynn s wicket, who danced down the track to Negi, only to be cleaned up with the ball turning the other way. Siraj dropped Lynn and Rana, but with Rana failed to exploit the reprieve falling in the next ball, caught by substitute fielder Heinrich Klassen at deep backward point.

But with Russell in the middle and Kolkata needing 66 off 24 balls, it was anybody’s game. Saini though got the wicket of Dinesh Karthik after he was hit for a six and four in the 17th over and Russell took over.

Earlier, Kohli put on the third hundred-run stand with de Villiers in the IPL after being put in to bat.

Right from the word go, Kohli was in sublime touch, opening his account with a picture-perfect cover drive off the first over bowled by Prasidh Krishna, he followed it up with another one leaning forward for his second boundary.

Lockie Ferguson was taken for three fours in the second over all hit by Kohli as he achieved the the milestone of 8000 T20 runs, only the second Indian to do so after Suresh Raina, and by the time Parthiv Patel (25) got out to part-timer Rana, Kohli had raced to 38 off 24 balls, taking Bangalore to 64/1 in eight overs.

However, the Indian skipper did ride his luck when he was dropped at short mid wicket by Narine in the 8th over, and Kohli punished KKR bowlers with aplomb, racing to his fifty off 30 balls, guiding one to third man boundary off Piyush Chawla.

De Villiers had an early reprieve when Ferguson, running in from long-on failed to hold on to tough chance after the South African top edged a big swing off Kuldeep Yadav.

After that, De Villiers of old was on show as he upped the ante in style clobbering Narine for two fours in an over and then hit Russell for two sixes in the 14th over. Rana was taken apart when Kohli added a four and six and then De Villiers closed out the over with another hit for a six.

With two back-to-back boundaries off Krishna, De Villiers got to his 31st IPL fifty off just 28 balls. Ferguson s second over -17th off the match was taken for 19 runs with a six and a four by Kohli, before de Villiers dispatched one wide of fine leg.

But, Kuldeep held on to a superb return catch to remove Kohli in the 18th over, Kohli also surpassed Raina to become the highest run-getter in IPL history as well.

Marcus Stoinis then scored an unbeaten 28 off 13 balls to take RCB past 200. 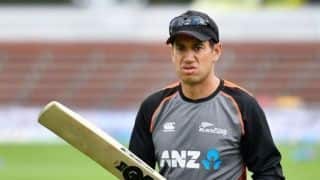 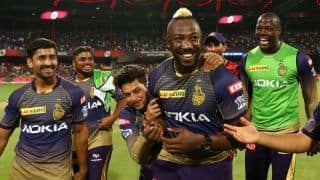