Delhi, starting afresh, got off to a winning start courtesy Rishabh Pant s powerful cameo of 78* off 27 balls and some good bowling under pressure lead by Kagiso Rabada.

Delhi, starting afresh, got off to a winning start in the 12th edition of the Indian T20 League with a 37-run win over three-time champions Mumbai, courtesy Rishabh Pant s powerful cameo of 78* off 27 balls and some good bowling under pressure led by Kagiso Rabada. (ALSO READ: Match Highlights: Mumbai vs Delhi)

After Pant had helped Delhi ransack 99 runs in the last seven overs, Mumbai found themselves needing 106 off seven, but with half their side back in the pavilion, it was always going to a tough ask and despite Yuvraj Singh turning back time with a 35-ball 53-run knock, the Shreyas Iyer-led team managed to hold their nerves to register a win.

While Delhi s new recruits a returning Shikhar Dhawan and T20 freelancer Colin Ingram got together for a stand of 73 runs in 9.2 overs for the third wicket to revive their team from early blows after being put in to bat, it was the retained player Pant who light up Wankhede with scintillating striking, that included seven sixes and seven fours, powering Delhi to 213/6.

Mumbai were left with a daunting task of completing the highest-ever successful chase for a win at the Wankhede, but stuttered early on losing three wickets inside their the powerplay overs. Rohit Sharma was undone by a knuckle ball by Ishant Sharma to depart for 14 while Suryakumar Yadav was run-out for two by an Iyer direct-hit. Quinton de Kock, who made 27 off 16 balls, become Ishant s second victim of the night when he was caught at fine man.

Yuvraj and Kieron Pollard then revived Mumbai with a stand of 50 runs for the fourth wicket with the duo taking on the Delhi spinners – Rahul Tewatia and Axar Patel – but the visitors edged ahead with scalps of Pollard (21) – off a knuckle ball from Keemo Paul – and Hardik Pandya (0) – caught and bowled by Patel.

Krunal Pandya, coming at No.7, kept Mumbai in the hunt with 15-ball 32-run knock before perishing to Trent Boult. Yuvraj, at the other hand, had a scrappy start failing to time the ball, but his timing got better as the innings progressed. He hit five fours and three sixes to keep his team alive, but with the asking rate mounting and two of the world s best pacers – Boult and Rabada – operating at the death, he fell to the South African in the deep, in the 19th over. With Bumrah not coming out to bat after suffering a shoulder injury, Mumbai s innings ended at 176. Ishant finished with 2/34 in his four while Boult returned 1/42. Rabada was the stand-out bowler with 2/20 in his four.

Earlier, Delhi, finding themselves at 29/2 in 3.4 overs, were buoyed by Ingram and Dhawan s calculated stand as the duo rotated the strike well and pounced on every chance to hit a boundary.

Delhi were pegged back again with the wickets of Ingram (47 off 42) and Dhawan (43 off 36) in the space of two overs, with Ben Cutting getting rid of Ingram caught at mid wicket while Dhawan perished to Hardik s off-cutter.

Pant had a scare early on when he nearly popped one off Hardik to mid-on, but he got going with two fours off Cutting one of which was an audacious flick to fine leg. He lost Paul and Axar at the other end, but the 22-year-old continued to play the risky shots getting maximum returns en route to a 17-ball fifty.

He took 16 runs off Hardik s final over the 18th of the match with two sixes and a four, before flicking Jasprit Bumrah for a six over square leg and a four swatting one close to his hips for a four in the same region.

Pant then dug in to 17-year-old debutant Rasiksh Salam Dar, taking two sixes and a four off the 19th over to spoil his figures. Dar s first three overs went for just 21 runs, but his last doubled the runs. Delhi closed out the innings strongly with Pant and Tewatia dispatching Bumrah for one six each. Bumrah picked up an injury off the last ball of Delhi s innings much to the worry of Mumbai and India fans. 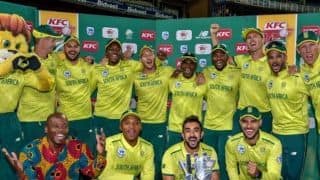