Sunrisers Hyderabad bowlers put in a clinical performance in Match 19 of the IPL 2019 against Mumbai Indians at the Rajiv Gandhi International Stadium, Hyderabad, limiting the visitors to 136/7.

Sunrisers Hyderabad bowlers put in a clinical performance in Match 19 of the IPL 2019 against Mumbai Indians at the Rajiv Gandhi International Stadium, Hyderabad, limiting the visitors to 136/7. (FOLLOW BLOG: SRH vs MI)

While the spin of Mohammed Nabi and Rashid Khan gave away just 40 runs in their eight overs, the domestic bowlers – Siddarth Kaul and Sandeep Sharma – returned three wickets between them at an economy of 6.66 and 8.50, respectively. (FOLLOW SCORE: SRH vs MI)

That Mumbai got to a respectable total owed largely to Kieron Pollard s late hitting in which he hit three sixes off Kaul and added two fours and a six off Bhuvneshwar. Rashid had dropped Pollard in the 18th over when the big West Indian was just on eight.

Mumbai ransacked 39 runs in the last two overs with Kaul giving away 20 runs in the 19th and Bhuvneshwar going for 19 runs.

After being put in to bat, Mumbai lost Rohit Sharma in the powerplay overs for the third time in four matches, when he sliced one off Mohammad Nabi to deep square leg fielder Deepak Hooda. Quinton de Kock got going, but once again, failed to convert the start and was holed out at deep midwicket off a slower one from Sandeep in the ninth over.

Mumbai s in-form batsman Suryakumar was earlier trapped in front by Sandeep in the fifth over for seven. Krunal Pandya and Ishan Kishan, playing in place of Yuvraj Singh, tried to revive the innings, but both fell in the space of two runs. The senior Pandya was taken by surprise by a sharp bouncer from Kaul, that was taken easily by Jonny bairstow behind the stumps for six.

SRH skipper Bhuvneshwar got Rashid in only at the 13th over and he bowled all of his four overs at one go. Off the last over, he got the big wicket of Hardik Pandya- after being hit for a six – caught at deep midwicket. 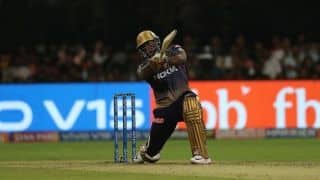