Spin caused problems for Vidarbha, with five of six wickets falling to the slow stuff.

Only two batsmen made fifties for Ranji Trophy winners Vidarbha on day two of the 2018-19 Irani Cup match in Nagpur, of which one, the not out Akshay Wadkar, is shaping as a crucial figure as they target a first-innings lead over Rest of India (RoI).

In reply to RoI’s 330, Vidarbha ended day two on 245/6, trailing by 85 runs. Wadkar is 50 off 96 balls, having held up one end after the hosts lost three wickets for the addition of 22 runs on Wednesday. (READ MORE: Hanuma Vihari, Mayank Agarwal form bulk of Rest of India’s 330)

The opener Sanjay Ramaswamy‘s 68 stands as the highest score of Vidarbha’s innings so far, with Ganesh Sathish dismissed for 48 in the midst of a collapse triggered by Dharmendrasinh Jadeja’s dismissal of Sanjay. Spin caused problems for Vidarbha, with Jadeja (2/66) and Karnataka’s K Gowtham (2/33) proving a handful.

Gowtham snapped an opening stand of 50 when he had Vidarbha skipper Faiz Fazal (27) caught behind. Atharva Thaide (15) was the next to go, lbw to legspinner Rahul Chahar, before Sanjay, Mohit Kale (1) and Sathish were dismissed.

Aditya Sarwate made 18 in partnership with Wadkar before he was the first wicket to fall to pace when Ankit Rajpoot won an lbw shout.

Akshay Karnewar, who scored a vital 78 not out in Vidarbha’s first innings during the Ranji Trophy final, is on 15 off 15 balls. 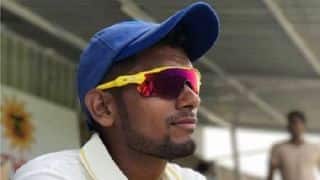 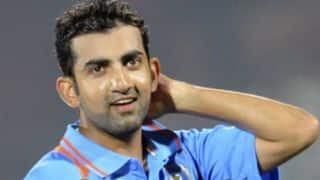