South Africa reached 199 for 5 in 50 overs against Board President's XI on the second day of the rain-curtailed warm-up match.

Opener Aiden Markram struck his second successive hundred in as many games as South Africa scored steadily to reach 199 for 5 in 50 overs against Board President’s XI on the second day of the rain-curtailed warm-up match on Friday. Markram had earlier scored 161 for South Africa A against India A in a first-class game last week.

On the day, he retired after completing his hundred in a game which has not been accorded first-class status. Markram’s innings was an attacking one as he faced 118 deliveries, hitting 18 boundaries and two sixes. His good form augurs well for South Africa as the 24-year-old right-hander was marked as one for the future by India captain Virat Kohli, when they toured the nation back in 2018.

Earlier, opener Dean Elgar was snuffed out by senior pacer Umesh Yadav (1/34), caught by Priyank Panchal in the slip cordon. No. 3 batsman Theunis de Bruyn got one from Ishan Porel (1/11) that jagged back in to trap him plumb in-front. The talented Zubayr Hamza (22) hit three fours and a six before left-arm spinner Dharmendra Jadeja (2/52) had him leg before with an arm ball. Jadeja from Saurashtra also had rival skipper Faf Du Plessis (9) the same way.

However before that, Markram and the stodgy Temba Bavuma (55) had a century partnership. The slightly built Bavuma also hit nine fours in his 92-ball unbeaten knock. The two pacers who didn’t perform up to the mark were Avesh Khan (0/44 in 10 overs), who got a bit of stick and Mumbai bowler Shardul Thakur (0/34 in 10 overs), who shared the new ball with Umesh.

The most impressive among the pacers was young Bengal speedster Ishan but unfortunately Board President’s XI skipper Rohit Sharma only gave him a six-over spell during which he got De Bruyn. 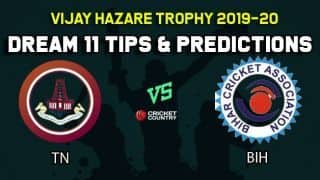 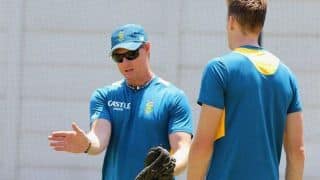