After their opening win against Tshwane Spartans in the first match of the Mzansi Super League 2018, Cape Town Blitz notched up their second successive win

After their opening win against Tshwane Spartans in the first match of the Mzansi Super League 2018, Cape Town Blitz notched up their second successive win in the 3rd match of the tournament, beating Albie Morkel-led Durban heat by three wickets at Kingsmead, Durban on Sunday.

After opting to bowl first, Cape Town Blitz gave away 41 runs in 5.3 overs, scored by Durban Heat openers – Morne Van Wyk and Hashim Amla. Van Wyk departed to Anrich Nortje in the sixth over followed by the wickets of Sarel Erwee and Temba Bavuma in the same over as Durban lost three wickets for 0 runs.

Seven runs later, Amla wicket meant Durban slumped to 48/4 before they were revived by Khaya Zondo and skipper Albie Morkel with a stand of 71 runs. Vernon Philander s 16 not out helped Durban to 157/5.

In reply, Cape Town lost skipper Dawid Malan for 12, but his younger brother Janneman made 31 off 26 at the top before falling to Keshav Maharaj in the ninth over. Cape Town then kept losing wickets at regular intervals; however, Asif Ali kept his end safe and led the chase for his team with a 33-ball 80-run knock which included seven fours and five sixes. He got out in the 18th over, with Cape Town needing 16 runs more to win, which was knocked off by the lower-order. 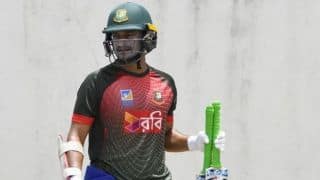 Bangladesh vs West Indies: It is great to have Shakib Al Hasan back: Bangladesh coach Steve Rhodes